Looking up at the stars and spotting constellations, shooting stars and comets is a joyful activity which situates us in our cosmic home. Astronomy is also humanity’s oldest science and for thousands of years, humans have used stars as our guides and time keepers. Over the last few decades, however, the quality of the night sky has been diminished as a result of human activity, both from ground-based pollution, including light pollution, and from pollution in our skies, including aeroplanes and the impending threat of satellites in low-Earth orbits.

According to a 2016 report, light pollution impacts over 80% of the world population’s ability to view the night sky. The glorious sight of the Milky Way stretching across the night sky is rapidly becoming a thing of the past, and several generations of people have now grown up having never seen the true beauty of the night sky. Today, one third of humanity cannot see the Milky Way at night due to light pollution. In addition, newly launched satellites are also starting to pollute the way we view the night sky, producing artefacts in astronomical images.

So, what are the types of pollution affecting our skies, and what is ESO doing to mitigate them?

The threats facing our skies

Light pollution is commonly defined as “artificial light that shines where it is neither wanted, nor needed”. Increasingly, this is resulting in the brightening of the dark night sky causing difficulties in observing astronomical objects from areas with high light pollution. Light pollution results from increasing industrialisation, and inefficient or excessive usage of light sources in cities and other areas. The sources of light pollution include both interior and exterior lighting, with external light sources, such as streetlights, spotlights and bright advertising billboards, contributing more heavily to the environmental impact of light pollution.

Professional astronomers are one of the groups for whom the effects of light pollution pose challenges. Errant light quite literally sets the sky aglow, making it hard for Earth-based observers to see dim objects: the brighter the sky, the fewer stars can be seen from Earth. This has a significant effect on imaging the night sky, especially using photometric imaging techniques (which measure the brightness of light from astronomical objects). This is because it is difficult to separate background light pollution from the light signals from the cosmos that astronomers are searching for.

Light pollution also affects amateur astronomers, humans and animals. Light can intrude into bedrooms, distract drivers, and upset the natural body clock of animals. The 2017 Nobel Prize in Physiology or Medicine was awarded to a group whose discoveries showed that the human body requires natural daylight rhythms and darkness at night to stay healthy, and subsequent studies have linked increasing light pollution to increased rates of certain cancers.

Wildlife in both rural and urban areas also suffer from disruption due to light pollution. Flocks of migratory birds and dung beetles alike orientate themselves using the Milky Way, and are disorientated by light pollution. In addition, light pollution contributes to huge energy wastage as lighting requires energy for both production and usage. For example, a study from 2012 showed that a small town in Italy spent 60% of its energy consumption on street lighting alone. Reducing excess lighting could, therefore, help reduce our carbon footprint.

To get around the problem of light pollution, astronomers build their telescopes far from cities in secluded dark-sky zones such as ESO’s Paranal Observatory in Chile’s Atacama Desert. But even in such remote locations, the pristine dark skies are increasingly at risk from light pollution due to the urban growth of cities near the observatories. 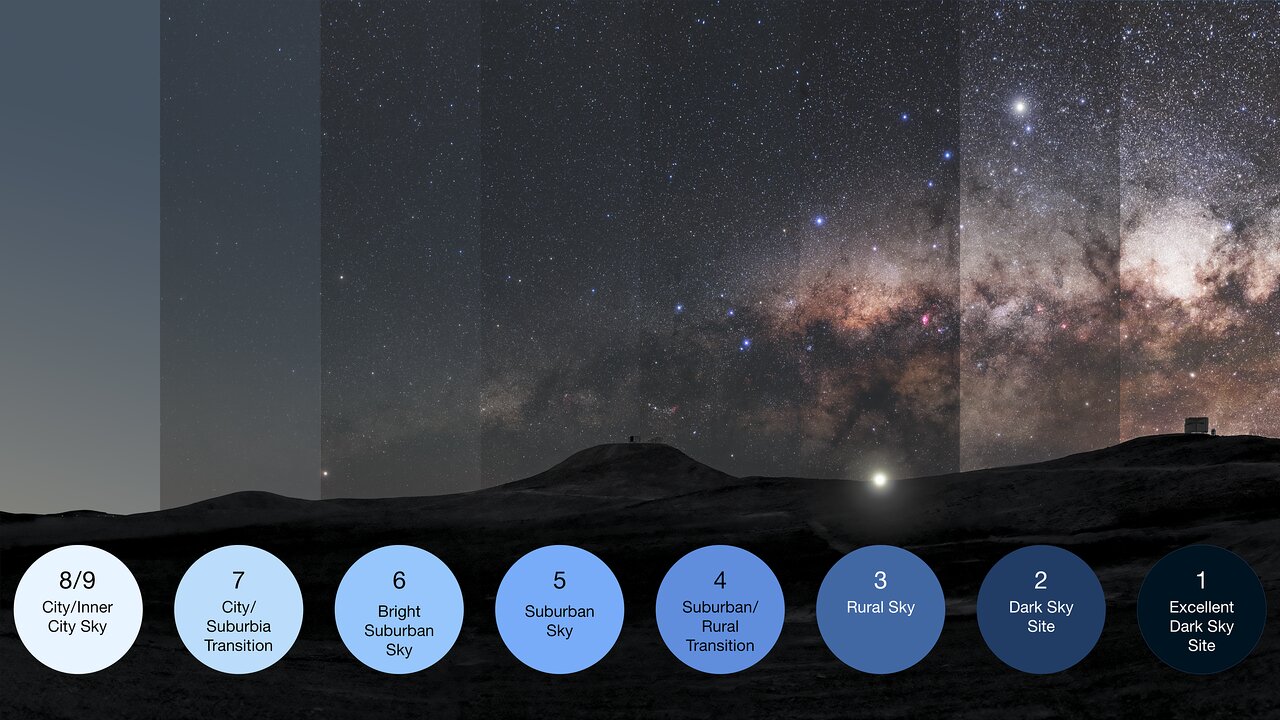 This image illustrates the Bortle scale, which measures the impact of light pollution on the dark skies at a given location. It shows, from left to right, the increase in the number of stars visible in excellent dark sky conditions compared with cities.
Credit: ESO/P. Horálek, M. Wallner

A new threat is emerging in the fight to protect our view of the night skies: the large number of satellites being introduced into low-Earth orbits. As many as 100 000 satellites could be placed into these orbits by companies such as SpaceX, Amazon and OneWeb in the coming decade. While important for global communications networks, these satellites can impact astronomy because of their sheer numbers, their brightness in the sky, and their ubiquitous radio emissions. When illuminated by sunlight, a satellite can appear like a luminous spot in the sky, almost like a faint, distant aeroplane. Due to the number of these satellites and the sunlight they reflect, they can disrupt measurements from Earth-based observatories, particularly twilight observations. 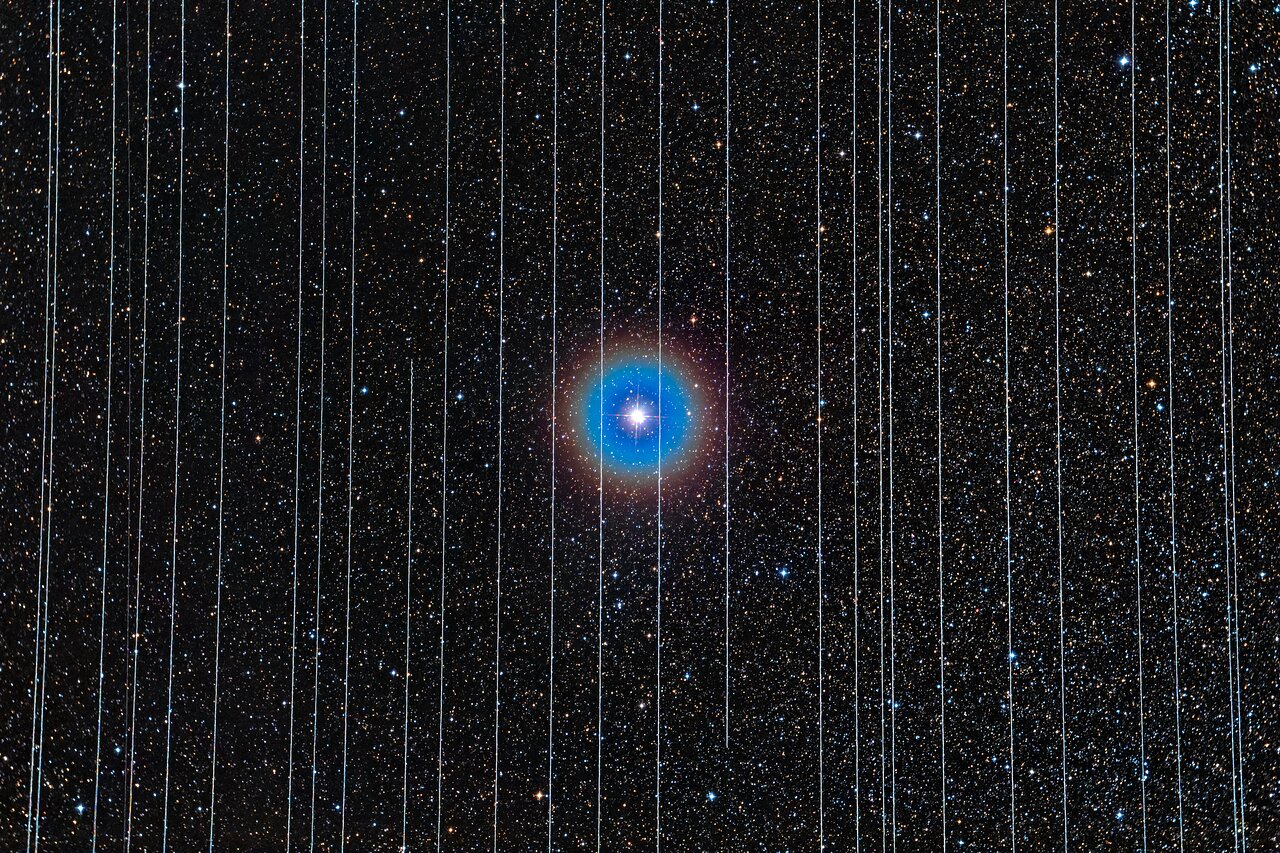 Observations from telescopes in low-Earth orbit, such as the NASA/ESA Hubble Space Telescope, can also be affected by satellites crossing their field of view. The telescopes themselves could also be damaged (or even destroyed) in collisions with other satellites or space debris, as can be seen in the 2013 film Gravity, in which Hubble is shredded by space debris.

An increasing number of satellites will be detectable above all observatories. This will have a noticeable effect in wide-field images from twilight observation — between dawn and sunrise or between sunset and dusk.

These satellites also impact radio astronomy. They amount to hundreds of radio transmitters above the observatory’s horizon, which will affect the measurements made by our highly sensitive radio telescopes, such as APEX or ALMA, in which ESO is a partner. (Note, however, that detailed studies of the effects of satellite constellations on ALMA or APEX are being performed, but have not been concluded yet.)

ESO is actively involved in research to study the potential effects of new satellite constellations. In 2020, an ESO study outlined the impacts of new satellite constellations on Earth-based observations of space in the optical and near-infrared. The study found that telescopes such as ESO’s Very Large Telescope (VLT) and the upcoming Extremely Large Telescope (ELT), both in Chile’s Atacama Desert, will be “moderately affected” by these satellites. A more recent study, expanding on the previous analysis and published in 2022, refined these findings.

The effect is more pronounced for long exposures, up to 3% of which may be ruined during twilight. The study also found that the greatest impact of new satellite constellations will be on wide-field surveys made by telescopes such as the US National Science Foundation’s Vera C. Rubin Observatory (not an ESO facility), with up to 30-50% of twilight observations being “seriously impacted”. 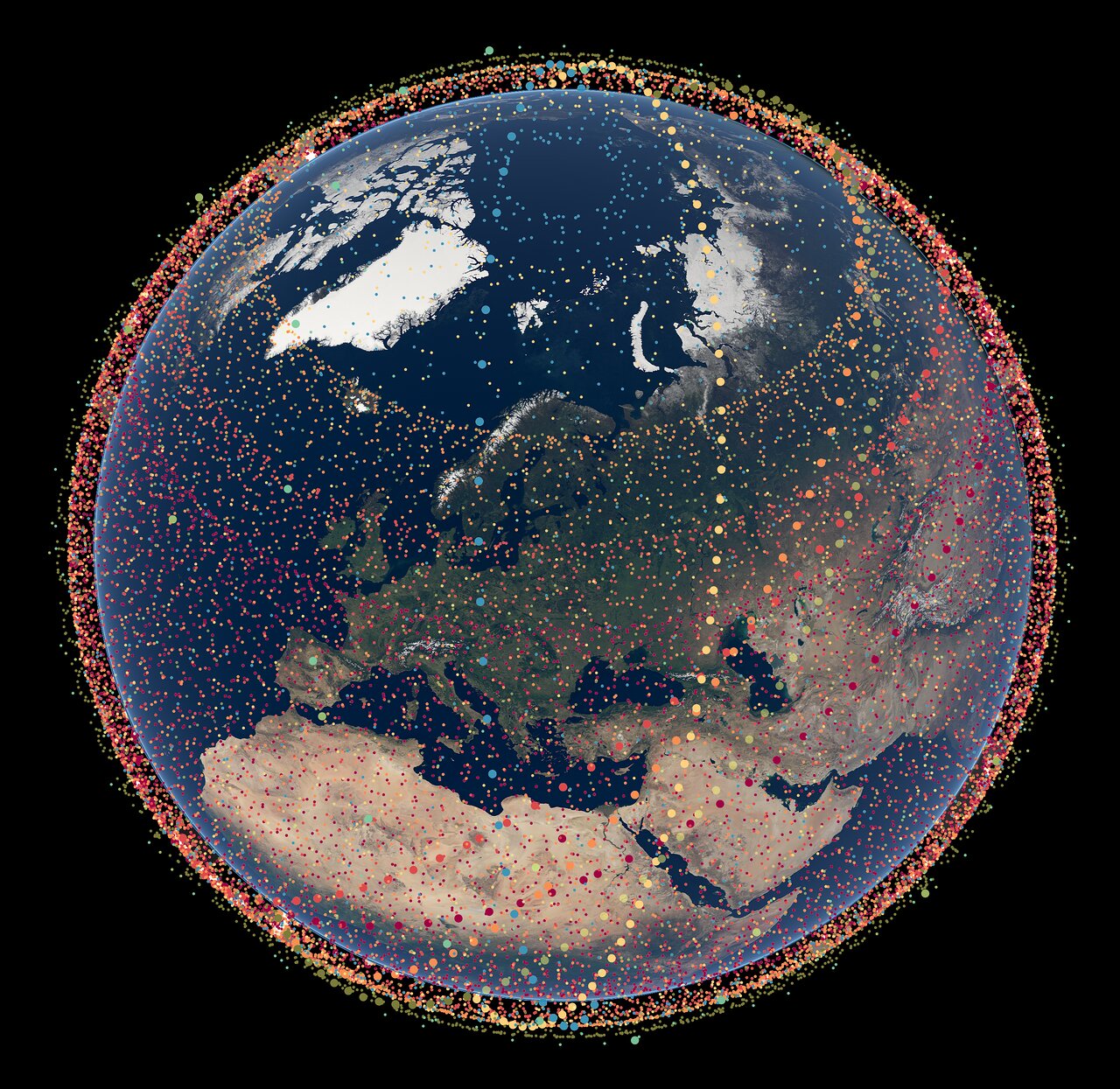 ESO has been actively involved in the campaign for dark and quiet skies preservation, and is participating in many projects supporting the reduction of pollution resulting from errant light, satellite constellations and aeroplanes. For example, above ESO’s Paranal Observatory a reduced flight schedule is in force so that planes in the vicinity of the observatory are never higher than a certain elevation as seen from the telescopes.

Through the ESO-Government of Chile Joint Committee, ESO funds multiple regional and national initiatives on increasing awareness of light pollution in the general public. More importantly, ESO and partner observatories sponsor and fund the Office for the Protection of the Sky Quality in Northern Chile (OPCC), whose mission is to protect the night skies of the Antofagasta, Atacama and Coquimbo regions from light pollution. The OPCC liaises with astronomy organisations and the Chilean authorities to find practical solutions to the threat of ever brightening skies. These solutions range from advice to local citizens about lighting design, to the introduction of new lighting standards. 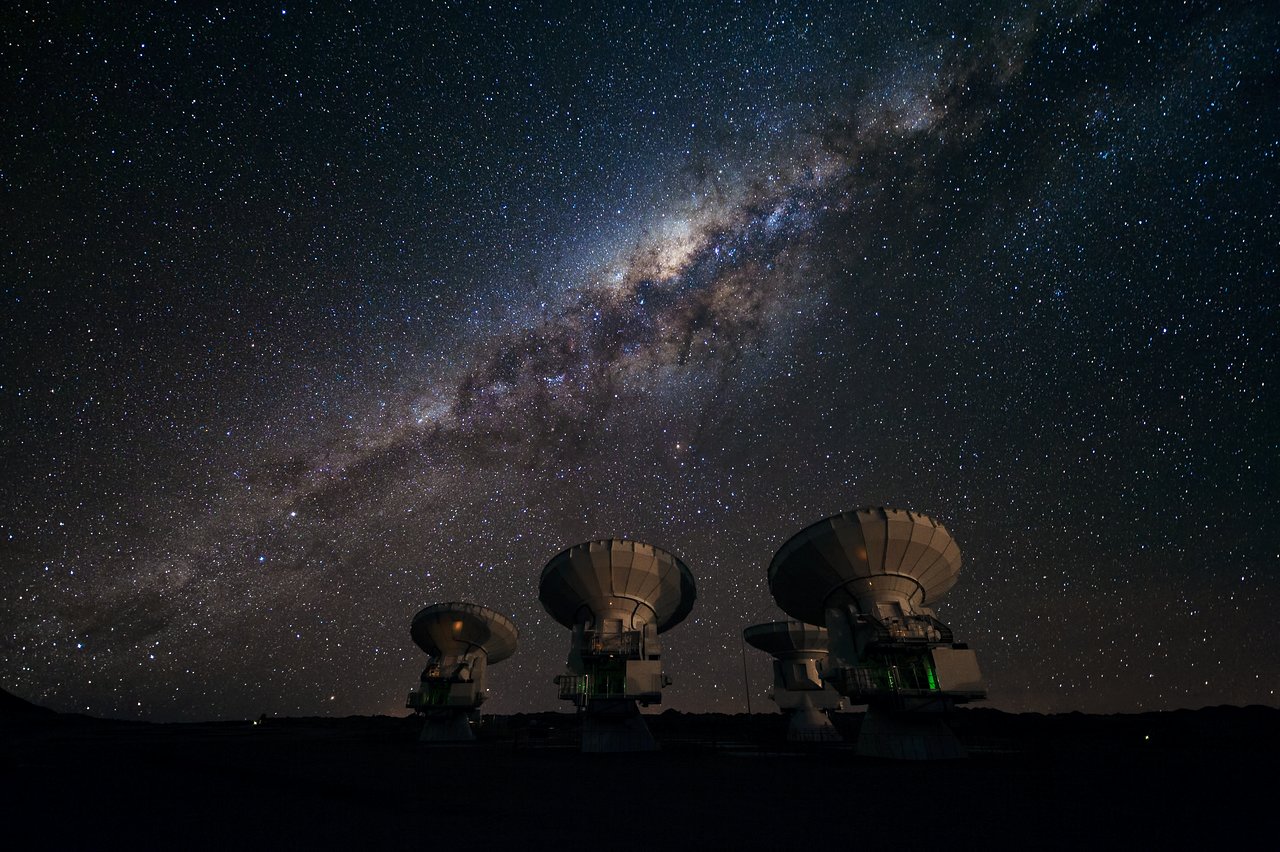 ESO has extensively warned of the dangers posed by satellite constellations on ground-based astronomical observatories. ESO scientists and policy experts formed part of the Dark and Quiet Skies Working Group, an international collaboration led by the International Astronomical Union (IAU) who have summarised their conclusions on dark and quiet skies protection in two reports, published in 2020 and 2021.

In collaboration with the IAU and other partner organisations, ESO also has gone on to petition the UN Committee on the Peaceful Uses of Outer Space (COPUOS) for better protections for our dark and radio-quiet skies. In 2022, the collaboration submitted a paper to COPUOS which was discussed at the 59th session of the COPUOS Science and Technical Subcommittee. This marked the first time the dark and quiet skies have ever been tabled as a formal agenda item by the United Nations.

"It is (...) in the interest of the entire international scientific community to protect global astronomical observing capabilities from adverse and significantly disruptive and harmful artificial interference." UN COPUOS Paper on the Protection of dark and quiet skies, 2022

Keeping on top of the various policy initiatives concerning astronomy is very important to ESO, who are a permanent observer at COPUOS. ESO are also involved in numerous other organisations which support dark and quiet skies protection, holding lifetime membership of the International Dark-Sky Association, and closely following other regional initiatives such as the European Dark Skies Conference. ESO is also a Contributing Member of the IAU Centre for the Protection of the Dark and Quiet Sky from Satellite Constellation Interference, which was established in April 2022 to coordinate multidisciplinary international efforts to help mitigate the negative impact of satellite constellations on optical and radio astronomy observations as well as on humanity’s enjoyment of the night sky.

ESO also contributes to initiatives that aim to protect the dark and quiet skies for everyone, taking part in projects such as the EU-funded STARS4ALL consortium, and Starlight Initiative, supported by UNESCO, the IAU, the United Nations World Tourism Organisation (UNWTO), and other worldwide organisations.

“An unpolluted night sky that allows the enjoyment and contemplation of the firmament should be considered a fundamental socio-cultural and environmental right,” the IAU resolution on the night sky reads, “The night sky has been and continues to be an inspiration of humankind, and its contemplation represents an essential element in the development of scientific thought in all civilisations.”