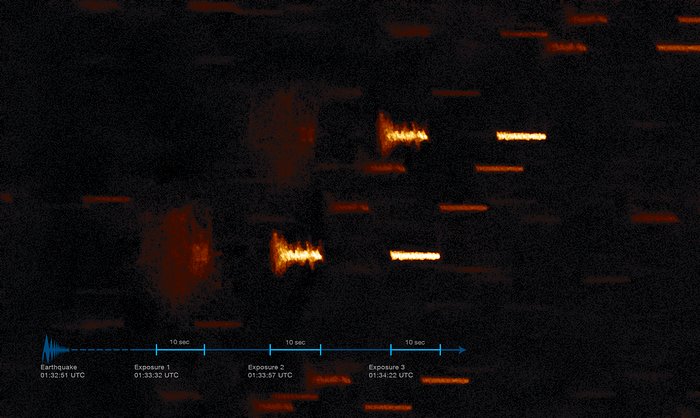 On the night of 20 January 2019 Coquimbo, Chile shook with the force of a magnitude 6.7 earthquake. Although Coquimbo lies 90 kilometres from ESO’s La Silla Observatory, its effects were far from unnoticed.

This unique image shows the earthquake as recorded by the Rapid Action Telescope for Transient Objects (TAROT), a telescope designed to monitor gamma-ray bursts.

On the night in question, TAROT was imaging geostationary satellites, which look like static points in the sky as seen from a telescope on the ground. As a result, the stars are recorded as trails, as the Earth rotates on its axis during the exposure. In this picture, three 10 second images, taken in rapid succession on the night of the earthquake, have been overlaid.

The recording on the image here is similar to measurements recorded by seismographs on a roll of paper.