Caught in a spiral 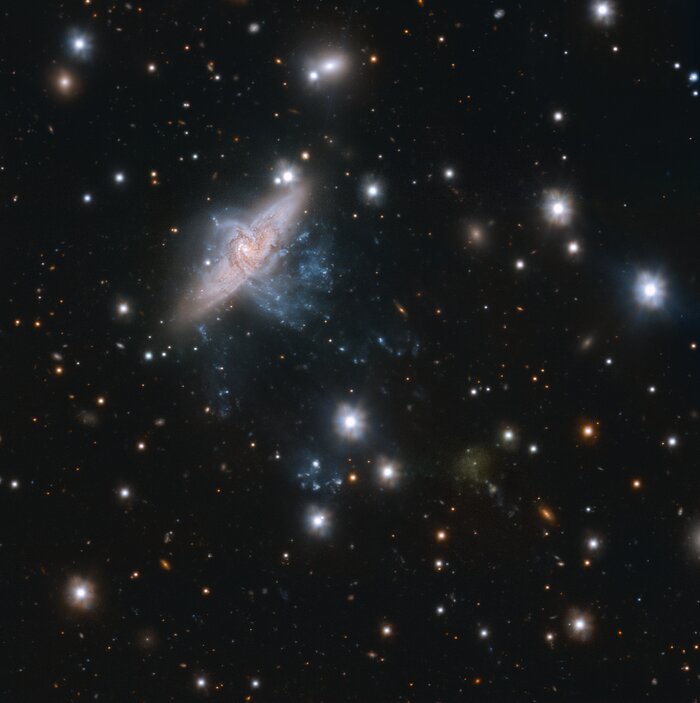 The image shows a pair of overlapping spiral galaxies, NGC 3314a and b, in the top left, caught in a majestic cosmic dance — captured by ESO’s VLT Survey Telescope (VST).

But don’t let the perspective fool you! They are, in fact, not interacting at all. The two galaxies, located between 117 and 140 million light-years away in the constellation of Hydra, are actually physically unrelated and only appear to overlap when viewed from Earth. This unique alignment gives astronomers the opportunity to measure many properties of the galaxies, such as how dust absorbs starlight, and hence gain insight into their composition and evolution.

There is another hidden secret in this picture if you look closely at the lower right region: beyond this stunning cosmic dance you will find a faint yellowish smudge, the signature of an ultra-diffuse galaxy (UDG). UDGs are objects as large as the Milky Way but with 100 – 1000 times fewer stars. These galaxies are extremely faint and lack star-forming gas, which makes them appear almost like a smudge in the night sky. This UDG, named UDG 32, is one of the faintest and most spread out galaxies in the Hydra I cluster.

This image was taken as part of a much larger project, the VST Early-type Galaxy Survey (VEGAS), whose goal is to investigate very faint structures in galaxy clusters — large groups of galaxies held together by gravity. The study, led by Enrichetta Iodice from the Istituto Nazionale di Astrofisica in Italy, suggests that UDG 32 may have formed out of the filaments stemming from NGC 3314a, but more observations are needed to confirm this.