The Purple Rose of Virgo

Until now NGC 5584 was just one galaxy among many others, located to the West of the Virgo Cluster. Known only as a number in galaxy surveys, its sheer beauty is now revealed in all its glory in a new VLT image. Since 1 March, this purple cosmic rose also holds the brightest stellar explosion of the year, known as SN 2007af.

Located about 75 million light years away towards the constellation Virgo ('the Virgin'), NGC 5584 is a galaxy slightly smaller than the Milky Way. It belongs, however, to the same category: both are barred spirals.

Spiral galaxies are composed of a 'bulge' and a flat disc. The bulge hosts old stars and usually a central supermassive black hole. Younger stars reside in the disc, forming the characteristic spiral structures from which the galaxies get their name. Barred spirals are crossed by a bright band of stars. In 2000, using ESO's Very Large Telescope, astronomers discovered the smallest, faintest, and most massive spirals (see eso0024).

In this amazing new image of NGC 5584 two dominant spiral arms are clearly visible, while the others are deformed, probably due to interactions with other galaxies. Luminous patches are spread all over the disc, indicating that stars are being formed in this gigantic rose at a frantic pace.

Something even brighter, however, catches the eye in this picture. Any image taken before the end of February would not have shown the luminous spot located at the lower right of the galaxy's centre. As can be seen, the newly found object is much brighter than the centre of the galaxy itself. Its name? SN 2007af, the 32nd supernova discovered this year. Its presence signals the dramatic death of a star with a mass comparable to that of the Sun.

SN 2007af, the brightest supernova of the year (so far), was discovered on 1 March by the Japanese supernova hunter Koichi Itagaki. He pointed his 60-centimetre telescope towards the Virgo constellation and discovered something that was not there before: SN 2007af. When it was discovered, its brightness (apparent visible magnitude of 15.4) was about seven times fainter than that of its host galaxy, NGC 5584. It has since brightened by the same factor of 7, reaching an apparent magnitude of 13.3 and making it observable by many amateur astronomers with smaller telescopes.

Observations on 4 March with ESO's New Technology Telescope at La Silla revealed that this energetic explosion is a Type Ia supernova that was observed a few days before it reached its maximal luminosity. Matter from the doomed star is ejected with velocities above 15,000 km/s.

Astronomers are observing SN2007af with ESO's VLT, with the aim of studying the geometry of the material ejected by the supernova, and thereby better understanding the explosion mechanism (see also ESO Press Release eso0644).

A Type Ia supernova is thought to be the result of the explosion of a small and dense star - a white dwarf - inside a binary system. As its companion continuously spills matter onto the white dwarf, the white dwarf reaches a critical mass, leading to a fatal instability and the supernova.

Type Ia supernovae are apparently quite similar to one another. This gives them a very useful role as 'standard candles' that can be used to measure cosmic distances. Their peak brightness rivals that of their parent galaxy, hence qualifying them as prime cosmic yardsticks. Astronomers have exploited this fortunate circumstance to study the expansion history of our Universe.

However Type Ia supernovae are rare events: a galaxy like the Milky Way may host a Type Ia supernova on average only every 400 years. Even so, SN 2007af is not the only brilliant detonation recently recorded in NGC 5584. Furthermore, it seems that Japanese amateur astronomers have a special talent for catching supernova explosions in this purple spiral. Indeed, in 1996 Aoki Masakatsu identified SN 1996aq in NGC 5584, a difficult to classify supernova subject to a hot discussion due to its ambiguous nature. 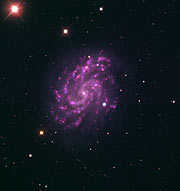