Astronomers have obtained the best images ever of a star that has lost most of its material to a vampire companion. By combining the light captured by four telescopes at ESO’s Paranal Observatory they created a virtual telescope 130 metres across with vision 50 times sharper than the NASA/ESA Hubble Space Telescope. Surprisingly, the new results show that the transfer of mass from one star to the other in this double system is gentler than expected.

“We can now combine light from four VLT telescopes and create super-sharp images much more quickly than before,” says Nicolas Blind (IPAG, Grenoble, France), who is the lead author on the paper presenting the results, “The images are so sharp that we can not only watch the stars orbiting around each other, but also measure the size of the larger of the two stars.”

The astronomers observed [1] the unusual system SS Leporis in the constellation of Lepus (The Hare), which contains two stars that circle around each other in 260 days. The stars are separated by only a little more than the distance between the Sun and the Earth, while the largest and coolest of the two stars extends to one quarter of this distance — corresponding roughly to the orbit of Mercury. Because of this closeness, the hot companion has already cannibalised about half of the mass of the larger star.

“We knew that this double star was unusual, and that material was flowing from one star to the other,” says co-author Henri Boffin, from ESO. “What we found, however, is that the way in which the mass transfer most likely took place is completely different from previous models of the process. The ‘bite’ of the vampire star is very gentle but highly effective.”

The new observations are sharp enough to show that the giant star is smaller than previously thought, making it much more difficult to explain how the red giant lost matter to its companion. The astronomers now think that, rather than streaming from one star to the other, the matter must be expelled from the giant star as a stellar wind and captured by the hotter companion.

“These observations have demonstrated the new snapshot imaging capability of the Very Large Telescope Interferometer. They pave the way for many further fascinating studies of interacting double stars,” concludes co-author Jean-Philippe Berger.

[1] The images were created from observations made with the Very Large Telescope Interferometer (VLTI) at ESOʼs Paranal Observatory using the four 1.8-metre Auxiliary Telescopes to feed light into a new instrument called PIONIER (see ann11021).

PIONIER, developed at LAOG/IPAG in Grenoble, France, is a visiting instrument at the Paranal Observatory. PIONIER is funded by Université Joseph Fourier, IPAG, INSU-CNRS (ASHRA-PNPS-PNP) ANR 2G-VLTI and ANR Exozodi. IPAG is part of the Grenoble Observatory (OSUG).

The VLTI engineers had to control the distance traversed by the light from the widely separated telescopes with an accuracy of about one hundredth of the thickness of a strand of human hair. Once the light reached PIONIER, it was then channelled into the heart of the instrument: a remarkable optical circuit, smaller than a credit card, that finally brought the light waves from the different telescopes together in a very precise way so that they could interfere. The resulting resolving power of the telescope array has the sharpness not of the individual 1.8-metre Auxiliary Telescopes, but that of a much bigger “virtual telescope” about 130 metres across, limited only by how far apart the telescopes can be positioned.

The resolution of the NASA/ESA Hubble Space Telescope is approximately 50 milliarcseconds whereas the resolution attainable with the VLTI is about one milliarcsecond — corresponding to the apparent size of an astronaut on the surface of the Moon, seen from Earth.

This research was presented in a paper, “An incisive look at the symbiotic star SS Leporis — Milli-arcsecond imaging with PIONIER/VLTI”, by N. Blind et al. in press in the journal Astronomy & Astrophysics. 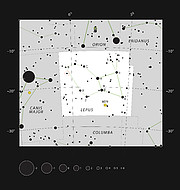 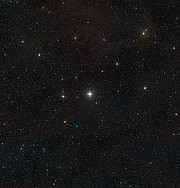