A Stellar Birthplace Shaped and Destroyed by Energetic Offspring

The little-known cloud of cosmic gas and dust called Gum 15 is the birthplace and home of hot young stars. Beautiful and deadly, these stars mould the appearance of the nebula from which they formed and, as they progress into adulthood, will eventually also destroy it.

This image was taken as part of  the ESO Cosmic Gems programme [1] using the Wide Field Imager on the MPG/ESO 2.2-metre telescope at the La Silla Observatory in Chile. It shows Gum 15, located in the constellation of Vela (The Sails), some 3000 light-years from Earth [2]. This glowing cloud is a striking example of an HII region [3]. Such clouds form some of the most spectacular astronomical objects we can see; for example the Eagle Nebula (which includes the feature nicknamed “The Pillars of Creation”), the great Orion Nebula, and this less famous example, Gum 15.

Hydrogen (H) is the most common element in the Universe, and can be found in virtually every environment investigated by astronomers. HII regions are different because they contain substantial amounts of ionised hydrogen — hydrogen atoms that have been stripped of their electrons through high energy interactions with ultraviolet photons — particles of light. As the ionised hydrogen nuclei recapture electrons they release light at different characteristic wavelengths. It is one of these that gives nebulae such as Gum 15 their reddish glow — a glow which astronomers call hydrogen alpha (Hα).

In HII regions the ionising photons come from the young hot stars within the region, and Gum 15 is no exception. At the centre of this image you can see one of the culprits: the star HD 74804, the brightest member of a cluster of stars known as Collinder 197.

The clumpy, irregular appearance that enhances this nebula’s beauty is not unusual for a HII region and is again a result of the stars within. HII regions have diverse shapes because the distribution of stars and gas inside them is so irregular. Adding to Gum 15’s interesting shape are the forked dark patch of obscuring dust visible in the centre of this image and some dim blue reflection structures crossing it. This dust feature makes the nebula resemble a larger and fainter version of the better known Trifid Nebula (Messier 20), although in this case the name Bifid Nebula might be more apposite.

An HII region like this one might give birth to thousands of stars over a period of several million years. Some of these stars cause it to glow and sculpt its shape, and it is these stars that will eventually destroy it. Once the newly minted stars have passed through their infant stages, strong winds of particles will stream away from these large stars, sculpting and dispersing the gases around them, and when the most massive of these stars begin to die, Gum 15 will die with them. Some stars are so large that they will go out with a bang, exploding as supernovae and dispersing the regions last traces of HII, leaving behind just a cluster of infant stars.

[1] The ESO Cosmic Gems programme is an initiative to produce images of interesting, intriguing or visually attractive objects using ESO telescopes, for the purposes of education and public outreach. The programme makes use of telescope time that cannot be used for science observations. All data collected may also be suitable for scientific purposes, and are made available to astronomers through ESO’s science archive.

[2] The name of this object comes from the Australian astronomer Colin Gum, who published a catalogue of HII regions in 1955.

[3] HII regions (pronounded “aitch-two”) are large clouds of gas and dust that are host to bursts of star formation and homes to infant stars. 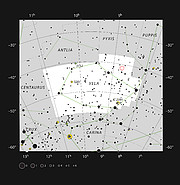 Foto PR eso1420b
Gum 15 in the constellation of Vela