On 26 September, John Halligan T.D., Irish Minister of State for Training, Skills, Innovation, Research and Development and Xavier Barcons, Director General of ESO signed the Accession Agreement that will lead to Ireland joining the European Southern Observatory (ESO) — the world’s most productive astronomical observatory. ESO is looking forward to welcoming Ireland and will work with the nation’s astronomers and industry to advance the cutting edge of astronomy.

Irish astronomers are set to gain access to the world’s most advanced ground-based astronomical telescopes following the signature of Ireland’s Accession Agreement in Dublin today, 26 September 2018. The signing of the Agreement follows the unanimous approval of Irish membership by the ESO Council at a meeting on 6 June 2018.

The formal ratification process for Irish membership of ESO has already almost been completed, following the approval of Dáil Éireann and Seanad Éireann — the Irish National Assembly and Senate. This process will be fully completed once the instrument of ratification — an official document — is deposited at the French Ministry of Foreign Affairs, which is expected to happen within a matter of days. The day of the deposit will be the official date of the Irish accession to ESO.

“We are delighted to welcome Ireland as the newest member of our organisation” stated ESO’s Director General, Xavier Barcons. “Ireland’s mature and thriving astronomical community will add to the broad variety of expertise in the ESO Member States, strengthening ESO’s position at the forefront of global astronomy. Irish astronomers will gain access to a suite of the world’s most advanced ground-based astronomical telescopes and will have the opportunity to be part of the construction of the next generation of ESO instruments in partnership with other ESO Member States. We are also very much looking forward to working with Irish industrial partners to build and operate ESO’s state-of-the-art telescopes.”

The accession cements the position of Ireland’s astronomical research community as an asset to worldwide astronomy. With the ESO Membership, Ireland gets access to ESO’s world-class suite of telescopes and instruments, including the Very Large Telescope (VLT) on Paranal and the Atacama Large Millimeter/submillimeter Array (ALMA) at Chajnantor, as well as the opportunity to contribute to the construction of the Extremely Large Telescope (ELT) in coming years.

By joining ESO, Ireland adds to their already rich astronomical history, stretching back centuries. For several decades in the 19th century, Ireland hosted the world’s largest telescope — the Leviathan of Parsonstown — a 1.8-metre reflecting telescope at Birr Castle (whose grounds are now home to I-LOFAR, port of a Europe-wide low-frequency radio telescope). Ireland’s vibrant research community and high-tech industrial sector have supported ESO membership for many years, and will now gain access to a range of instrumentation and industrial opportunities as a result of ESO membership.

Speaking at the signing, Minister Halligan welcomed this important step in Ireland’s membership process: “I am delighted to have signed this membership agreement with the European Southern Observatory.  This represents the culmination of significant work by the Government and ESO as well as the Irish astrophysics community. As a member of the leading astronomical research organisation in the world, Ireland has an opportunity to gain access to excellent research, innovation, collaboration and industry contracts. This significant investment in our scientific community demonstrates the Irish Government’s continued commitment to research and development in both our academic and industrial sectors.” 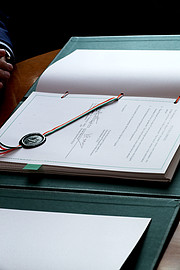