Dancing with the Enemy

While testing a new subsystem on the SPHERE planet-hunting instrument on ESO’s Very Large Telescope, astronomers were able to capture dramatic details of the turbulent stellar relationship in the binary star R Aquarii with unprecedented clarity — even compared to observations from Hubble.

This spectacular image — the second instalment in ESO’s R Aquarii Week — shows intimate details of the dramatic stellar duo making up the binary star R Aquarii. Though most binary stars are bound in a graceful waltz by gravity, the relationship between the stars of R Aquarii is far less serene. Despite its diminutive size, the smaller of the two stars in this pair is steadily stripping material from its dying companion — a red giant.

Years of observation have uncovered the peculiar story behind the binary star R Aquarii, visible at the heart of this image. The larger of the two stars, the red giant, is a type of star known as a Mira variable. At the end of their life, these stars start to pulsate, becoming 1000 times as bright as the Sun as their outer envelopes expand and are cast into the interstellar void.

The death throes of this vast star are already dramatic, but the influence of the companion white dwarf star transforms this intriguing astronomical situation into a sinister cosmic spectacle. The white dwarf — which is smaller, denser and much hotter than the red giant — is flaying material from the outer layers of its larger companion. The jets of stellar material cast off by this dying giant and white dwarf pair can be seen here spewing outwards from R Aquarii.

Occasionally, enough material collects on the surface of the white dwarf to trigger a thermonuclear nova explosion, a titanic event which throws a vast amount of material into space. The remnants of past nova events can be seen in the tenuous nebula of gas radiating from R Aquarii in this image.

R Aquarii lies only 650 light-years from Earth — a near neighbour in astronomical terms — and is one of the closest symbiotic binary stars to Earth. As such, this intriguing binary has received particular attention from astronomers for decades. Capturing an image of the myriad features of R Aquarii was a perfect way for astronomers to test the capabilities of the Zurich IMaging POLarimeter (ZIMPOL), a component on board the planet-hunting instrument SPHERE. The results exceeded observations from space — the image shown here is even sharper than observations from the famous NASA/ESA Hubble Space Telescope.

SPHERE was developed over years of studies and construction to focus on one of the most challenging and exciting areas of astronomy: the search for exoplanets. By using a state-of-the-art adaptive optics system and specialised instruments such as ZIMPOL, SPHERE can achieve the challenging feat of directly imaging exoplanets. However, SPHERE’s capabilities are not limited to hunting for elusive exoplanets. The instrument can also be used to study a variety of astronomical sources — as can be seen from this spellbinding image of the stellar peculiarities of R Aquarii.

This research was presented in the paper “SPHERE / ZIMPOL observations of the symbiotic system R Aqr. I. Imaging of the stellar binary and the innermost jet clouds” by H.M. Schmid et. al, which was published in the journal Astronomy & Astrophysics. 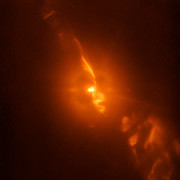 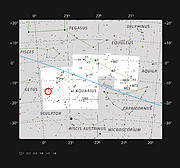 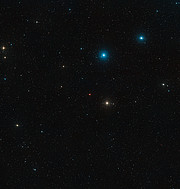