Is This Speck of Light an Exoplanet?

Is this newly discovered feeble point of light the long-sought bona-fide image of an exoplanet? A research paper by an international team of astronomers [2] provides sound arguments in favour, but the definitive answer is now awaiting further observations. On several occasions during the past years, astronomical images revealed faint objects, seen near much brighter stars. Some of these have been thought to be those of orbiting exoplanets, but after further study, none of them could stand up to the real test. Some turned out to be faint stellar companions, others were entirely unrelated background stars. This one may well be different. In April of this year, the team of European and American astronomers detected a faint and very red point of light very near (at 0.8 arcsec angular distance) a brown-dwarf object, designated 2MASSWJ1207334-393254. Also known as "2M1207", this is a "failed star", i.e. a body too small for major nuclear fusion processes to have ignited in its interior and now producing energy by contraction. It is a member of the TW Hydrae stellar association located at a distance of about 230 light-years. The discovery was made with the adaptive-optics supported NACO facility [3] at the 8.2-m VLT Yepun telescope at the ESO Paranal Observatory (Chile). The feeble object is more than 100 times fainter than 2M1207 and its near-infrared spectrum was obtained with great efforts in June 2004 by NACO, at the technical limit of the powerful facility. This spectrum shows the signatures of water molecules and confirms that the object must be comparatively small and light. None of the available observations contradict that it may be an exoplanet in orbit around 2M1207. Taking into account the infrared colours and the spectral data, evolutionary model calculations point to a 5 jupiter-mass planet in orbit around 2M1207. Still, they do not yet allow a clear-cut decision about the real nature of this intriguing object. Thus, the astronomers refer to it as a "Giant Planet Candidate Companion (GPCC)" [4]. Observations will now be made to ascertain whether the motion in the sky of GPCC is compatible with that of a planet orbiting 2M1207. This should become evident within 1-2 years at the most.

Just a speck of light

Since 1998, a team of European and American astronomers [2] is studying the environment of young, nearby "stellar associations", i.e., large conglomerates of mostly young stars and the dust and gas clouds from which they were recently formed.

The stars in these associations are ideal targets for the direct imaging of sub-stellar companions (planets or brown dwarf objects). The leader of the team, ESO astronomer Gael Chauvin notes that "whatever their nature, sub-stellar objects are much hotter and brighter when young - tens of millions of years - and therefore can be more easily detected than older objects of similar mass".

The team especially focused on the study of the TW Hydrae Association. It is located in the direction of the constellation Hydra (The Water-Snake) deep down in the southern sky, at a distance of about 230 light-years. For this, they used the NACO facility [3] at the 8.2-m VLT Yepun telescope, one of the four giant telescopes at the ESO Paranal Observatory in northern Chile. The instrument's adaptive optics (AO) overcome the distortion induced by atmospheric turbulence, producing extremely sharp near-infrared images. The infrared wavefront sensor was an essential component of the AO system for the success of these observations. This unique instrument senses the deformation of the near-infrared image, i.e. in a wavelength region where objects like 2M1207 (see below) are much brighter than in the visible range.

The TW Hydrae Association contains a star with an orbiting brown dwarf companion, approximately 20 times the mass of Jupiter, and four stars surrounded by dusty proto-planetary disks. Brown dwarf objects are "failed stars", i.e. bodies too small for nuclear processes to have ignited in their interior and now producing energy by contraction. They emit almost no visible light. Like the Sun and the giant planets in the solar system, they are composed mainly of hydrogen gas, perhaps with swirling cloud belts.

On a series of exposures made through different optical filters, the astronomers discovered a tiny red speck of light, only 0.8 arcsec from the TW Hydrae Association brown-dwarf object 2MASSWJ1207334-393254, or just "2M1207", cf. eso0428a. The feeble image is more than 100 times fainter than that of 2M1207. "If these images had been obtained without adaptive optics, that object would not have been seen," says Gael Chauvin.

Christophe Dumas, another member of the team, is enthusiastic: "The thrill of seeing this faint source of light in real-time on the instrument display was unbelievable. Although it is surely much bigger than a terrestrial-size object, it is a strange feeling that it may indeed be the first planetary system beyond our own ever imaged."

What is the nature of this faint object [4]? Could it be an exoplanet in orbit around that young brown dwarf object at a projected distance of about 8,250 million km (about twice the distance between the Sun and Neptune)?

"If the candidate companion of 2M1207 is really a planet, this would be the first time that a gravitationally bound exoplanet has been imaged around a star or a brown dwarf" says Benjamin Zuckerman of UCLA, a member of the team and also of NASA's Astrobiology Institute.

Using high-angular-resolution spectroscopy with the NACO facility, the team has confirmed the substellar status of this object - now referred to as the "Giant Planet Candidate Companion (GPCC)" - by identifying broad water-band absorptions in its atmosphere, cf. PR ESO Press Photo eso0428.

The spectrum of a young and hot planet - as the GPCC may well be - will have strong similarities with an older and more massive object such as a brown dwarf. However, when it cools down after a few tens of millions of years, such an object will show the spectral signatures of a giant gaseous planet like those in our own solar system.

Although the spectrum of GPCC is quite "noisy" because of its faintness, the team was able to assign to it a spectral characterization that excludes a possible contamination by extra-galactic objects or late-type cool stars with abnormal infrared excess, located beyond the brown dwarf.

After a very careful study of all options, the team found that, although this is statistically very improbable, the possibility that this object could be an older and more massive, foreground or background, cool brown dwarf cannot be completely excluded. The related detailed analysis is available in the resulting research paper that has been accepted for publication in the European journal Astronomy & Astrophysics (see below).

The brown dwarf 2M1207 has approximately 25 times the mass of Jupiter and is thus about 42 times lighter than the Sun. As a member of the TW Hydrae Association, it is about eight million years old.

Because our solar system is 4,600 million years old, there is no way to directly measure how the Earth and other planets formed during the first tens of millions of years following the formation of the Sun. But, if astronomers can study the vicinity of young stars which are now only tens of millions of years old, then by witnessing a variety of planetary systems that are now forming, they will be able to understand much more accurately our own distant origins.

Anne-Marie Lagrange, a member of the team from the Grenoble Observatory (France), looks towards the future: "Our discovery represents a first step towards opening a whole new field in astrophysics: the imaging and spectroscopic study of planetary systems. Such studies will enable astronomers to characterize the physical structure and chemical composition of giant and, eventually, terrestrial-like planets."

Taking into account the infrared colours and the spectral data available for GPCC, evolutionary model calculations point to a 5 jupiter-mass planet, about 55 times more distant from 2M1207 than the Earth is from the Sun (55 AU). The surface temperature appears to be about 10 times hotter than Jupiter, about 1000 °C; this is easily explained by the amount of energy that must be liberated during the current rate of contraction of this young object (indeed, the much older giant planet Jupiter is still producing energy in its interior).

The astronomers will now continue their research to confirm or deny whether they have in fact discovered an exoplanet. Over the next few years, they expect to establish beyond doubt whether the object is indeed a planet in orbit around the brown dwarf 2M1207 by watching how the two objects move through space and to learn whether or not they move together. They will also measure the brightness of the GPCC at multiple wavelengths and more spectral observations may be attempted.

There is no doubt that future programmes to image exoplanets around nearby stars, either from the ground with extremely large telescopes equipped with specially designed adaptive optics, or from space with special planet-finder telescopes, will greatly profit from current technological achievements.

[1] This press release is issued simultaneously by ESO and CNRS (in French).

[3] The NACO facility (from NAOS/Nasmyth Adaptive Optics System and CONICA/Near-Infrared Imager and Spectrograph) at the 8.2-m VLT Yepun telescope on Paranal offers the capability to produce diffraction-limited near-infrared images of astronomical objects. It senses the radiation in this wavelength region with the N90C10 dichroic; 90 percent of the flux is transmitted to the wavefront sensor and 10 percent to the near-infrared camera CONICA. This mode is particularly useful for sharp imaging of red and very-low-mass stellar or substellar objects. The adaptive optics corrector (NAOS) was built, under an ESO contract, by Office National d'Etudes et de Recherches Aérospatiales (ONERA), Laboratoire d'Astrophysique de Grenoble (LAOG) and the LESIA and GEPI laboratories of the Observatoire de Paris in France, in collaboration with ESO. The CONICA camera was built, under an ESO contract, by the Max-Planck-Institut für Astronomie (MPIA) (Heidelberg) and the Max-Planck Institut für extraterrestrische Physik (MPE) (Garching) in Germany, in collaboration with ESO.

[4] What is the difference between a small brown dwarf and an exoplanet ? The border line between the two is still being investigated but it appears that a brown dwarf object is formed in the same way as stars, i.e. by contraction in an interstellar cloud while planets are formed within stable circumstellar disks via collision/accretion of planetesimals or disk instabilities. This implies that brown dwarfs are formed faster (less than 1 million years) than planets (~10 million years). Another way of separating the two kinds of objects is by mass (as this is also done between brown dwarfs and stars): (giant) planets are lighter than about 13 jupiter-masses (the critical mass needed to ignite deuterium fusion), brown dwarfs are heavier. Unfortunately, the first definition cannot be used in practice, e.g., when detecting a faint companion as in the present case, since the observations do not provide information about the way the object was formed. On the contrary, the above mass criterion is useful in the sense that spectroscopy and astrometry of a faint object, together with the appropriate evolutionary models, may reveal the mass and hence the nature of the object.

The results presented in this ESO Press Release are based on a research paper ("A Giant Planet Candidate near a Young Brown Dwarf" by G. Chauvin et al.) that has been accepted for publication and will appear in the leading research journal "Astronomy and Astrophysics" on September 23, 2004 (Vol. 425, Issue 2, page L29). A preprint is available here and also as astro-ph0409323. 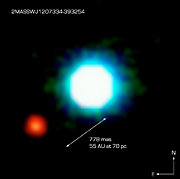 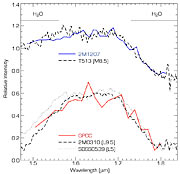 PR Image eso0428c
Comparison between the possible 2M1207 system and the solar system
Send us your comments!
Subscribe to receive news from ESO in your language
Accelerated by CDN77
Terms & Conditions