The galaxies in this cosmic pairing, captured by the Wide Field Imager on the MPG/ESO 2.2-metre telescope at the La Silla Observatory in Chile, display some curious features, demonstrating that each member of the duo is close enough to feel the distorting gravitational influence of the other. The gravitational tug of war has warped the spiral shape of one galaxy, NGC 3169, and fragmented the dust lanes in its companion NGC 3166. Meanwhile, a third, smaller galaxy to the lower right, NGC 3165, has a front-row seat to the gravitational twisting and pulling of its bigger neighbours.

This galactic grouping, found about 70 million light-years away in the constellation Sextans (The Sextant), was discovered by the English astronomer William Herschel in 1783. Modern astronomers have gauged the distance between NGC 3169 (left) and NGC 3166 (right) as a mere 50 000 light-years, a separation that is only about half the diameter of the Milky Way galaxy. In such tight quarters, gravity can start to play havoc with galactic structure.

Spiral galaxies like NGC 3169 and NGC 3166 tend to have orderly swirls of stars and dust pinwheeling about their glowing centres. Close encounters with other massive objects can jumble this classic configuration, often serving as a disfiguring prelude to the merging of galaxies into one larger galaxy. So far, the interactions of NGC 3169 and NGC 3166 have just lent a bit of character. NGC 3169’s arms, shining bright with big, young, blue stars, have been teased apart, and lots of luminous gas has been drawn out from its disc. In NGC 3166’s case, the dust lanes that also usually outline spiral arms are in disarray. Unlike its bluer counterpart, NGC 3166 is not forming many new stars.

NGC 3169 has another distinction: the faint yellow dot beaming through a veil of dark dust just to the left of and close to the galaxy’s centre [1]. This flash is the leftover of a supernova detected in 2003 and known accordingly as SN 2003cg. A supernova of this variety, classified as a Type Ia, is thought to occur when a dense, hot star called a white dwarf — a remnant of medium-sized stars like our Sun — gravitationally sucks gas away from a nearby companion star. This added fuel eventually causes the whole star to explode in a runaway fusion reaction.

The new image presented here of a remarkable galactic dynamic duo is based on data selected by Igor Chekalin for ESO’s Hidden Treasures 2010 astrophotography competition. Chekalin won the first overall prize and this image received the second highest ranking of the nearly 100 contest entries [2].

[1] Other much more noticeable points of light, such as the one toward the left end of the spiral arm running underneath of NGC 3169’s core, are stars within the Milky Way that happen to fall by chance very close to the line of sight between our telescopes and the galaxies. 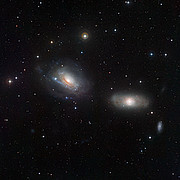 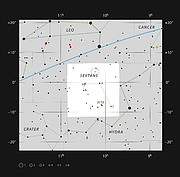 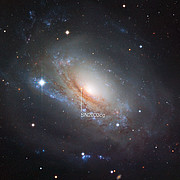 PR Video eso1114a
Zooming in on the disturbed galactic duo NGC 3169 and NGC 3166
Send us your comments!
Subscribe to receive news from ESO in your language
Accelerated by CDN77
Terms & Conditions