The Star That Should Not Exist

A team of European astronomers has used ESO’s Very Large Telescope (VLT) to track down a star in the Milky Way that many thought was impossible. They discovered that this star is composed almost entirely of hydrogen and helium, with only remarkably small amounts of other chemical elements in it. This intriguing composition places it in the “forbidden zone” of a widely accepted theory of star formation, meaning that it should never have come into existence in the first place. The results will appear in the 1 September 2011 issue of the journal Nature.

A faint star in the constellation of Leo (The Lion), called SDSS J102915+172927 [1], has been found to have the lowest amount of elements heavier than helium (what astronomers call “metals”) of all stars yet studied. It has a mass smaller than that of the Sun and is probably more than 13 billion years old.

“A widely accepted theory predicts that stars like this, with low mass and extremely low quantities of metals, shouldn’t exist because the clouds of material from which they formed could never have condensed,” [2] said Elisabetta Caffau (Zentrum für Astronomie der Universität Heidelberg, Germany and Observatoire de Paris, France), lead author of the paper. “It was surprising to find, for the first time, a star in this ‘forbidden zone’, and it means we may have to revisit some of the star formation models.”

The team analysed the properties of the star using the X-shooter and UVES instruments on the VLT [3]. This allowed them to measure how abundant the various chemical elements were in the star. They found that the proportion of metals in SDSS J102915+172927 is more than 20 000 times smaller than that of the Sun [4][5].

“The star is faint, and so metal-poor that we could only detect the signature of one element heavier than helium — calcium — in our first observations,” said Piercarlo Bonifacio (Observatoire de Paris, France), who supervised the project. “We had to ask for additional telescope time from ESO’s Director General to study the star’s light in even more detail, and with a long exposure time, to try to find other metals.”

Cosmologists believe that the lightest chemical elements — hydrogen and helium — were created shortly after the Big Bang, together with some lithium [6], while almost all other elements were formed later in stars. Supernova explosions spread the stellar material into the interstellar medium, making it richer in metals. New stars form from this enriched medium so they have higher amounts of metals in their composition than the older stars. Therefore, the proportion of metals in a star tells us how old it is.

“The star we have studied is extremely metal-poor, meaning it is very primitive. It could be one of the oldest stars ever found,” adds Lorenzo Monaco (ESO, Chile), also involved in the study.

Also very surprising was the lack of lithium in SDSS J102915+172927. Such an old star should have a composition similar to that of the Universe shortly after the Big Bang, with a few more metals in it. But the team found that the proportion of lithium in the star was at least fifty times less than expected in the material produced by the Big Bang.

“It is a mystery how the lithium that formed just after the beginning of the Universe was destroyed in this star.” Bonifacio added.

The researchers also point out that this freakish star is probably not unique. “We have identified several more candidate stars that might have metal levels similar to, or even lower than, those in SDSS J102915+172927. We are now planning to observe them with the VLT to see if this is the case,” concludes Caffau.

[1] The star is catalogued in the Sloan Digital Sky Survey or SDSS. The numbers refer to the object’s position in the sky.

[2] Widely accepted star formation theories state that stars with a mass as low as SDSS J102915+172927 (about 0.8 solar masses or less) could only have formed after supernova explosions enriched the interstellar medium above a critical value. This is because the heavier elements act as “cooling agents”, helping to radiate away the heat of gas clouds in this medium, which can then collapse to form stars. Without these metals, the pressure due to heating would be too strong, and the gravity of the cloud would be too weak to overcome it and make the cloud collapse. One theory in particular identifies carbon and oxygen as the main cooling agents, and in SDSS J102915+172927 the amount of carbon is lower than the minimum deemed necessary for this cooling to be effective.

[3] X-shooter and UVES are VLT spectrographs — instruments used to separate the light from celestial objects into its component colours and allow detailed analysis of the chemical composition. X-shooter can capture a very wide range of wavelengths in the spectrum of an object in one shot (from the ultraviolet to the near-infrared). UVES is the Ultraviolet and Visual Echelle Spectrograph, a high-resolution optical instrument.

[4] The star HE 1327-2326, discovered in 2005, has the lowest known iron abundance, but it is rich in carbon. The star now analysed has the lowest proportion of metals when all chemical elements heavier than helium are considered.

[5] ESO telescopes have been deeply involved in many of the discoveries of the most metal-poor stars. Some of the earlier results were reported in eso0228 and eso0723 and the new discovery shows that observations with ESO telescopes have let astronomers make a further step closer to finding the first generation of stars.

[6] Primordial nucleosynthesis refers to the production of chemical elements with more than one proton a few moments after the Big Bang. This production happened in a very short time, allowing only hydrogen, helium and lithium to form, but no heavier elements. The Big Bang theory predicts, and observations confirm, that the primordial matter was composed of about 75% (by mass) of hydrogen, 25% of helium, and trace amounts of lithium.

This research was presented in a paper, “An extremely primitive halo star“, by Caffau et al. to appear in the 1 September 2011 issue of the journal Nature. 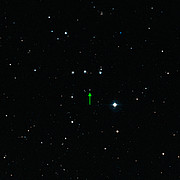 PR Image eso1132a
A star that should not exist 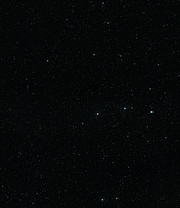 PR Video eso1132a
Zooming in on the remarkable star SDSS J102915+172927
Send us your comments!
Subscribe to receive news from ESO in your language
Accelerated by CDN77
Terms & Conditions