GIRAFFE Reaches towards the Stars

"First Light" of New Powerful Spectrograph at the VLT

The first observations of stellar spectra have just been performed with the new GIRAFFE multi-object spectrograph on the ESO Very Large Telescope (VLT) at the Paranal Observatory in Chile. This milestone event was achieved in the early morning of July 3, 2002. It signifies another important step towards the full implementation of the extremely powerful Fibre Large Array Multi-Element Spectrograph (FLAMES), one of the main instruments for the ESO VLT. This project is co-ordinated by ESO and incorporates many complex components that have been constructed at various research institutions in Europe and Australia. The GIRAFFE spectrograph provides unique possibilities for detailed observations of the properties of individual stars located in our Milky Way galaxy ( PR 16b/02 ) as well as in other galaxies of the Local Group.

This complex instrument allows to obtain high-quality spectra of a large variety of celestial objects, from individual stars in the Milky Way and other nearby galaxies, to very distant galaxies. It functions by means of multiple optical fibres that guide the light from the telescope's focal plane into the entry slit of the spectrograph. Here the light is dispersed into its different colours.

Anticipating already at this early moment the future, highly effective operation of the new facility, the first data were immediately prepared for astronomical interpretation ("reduced") by means of a dedicated software package ("pipeline").

GIRAFFE and these fibres are an integral part of the advanced Fibre Large Array Multi-Element Spectrograph (FLAMES) facility which also includes the OzPoz positioner and an optical field corrector . It is the outcome of a collaboration between ESO, Observatoire de Paris-Meudon Observatoire de Genève-Lausanne and the Anglo Australian Observatory (AAO).

The principle of this instrument involves the positioning in the telescope's focal plane of a large number of optical fibres. This is done in such a way that each of them guides the light from one particular celestial object towards the spectrograph that records the spectra of all these objects simultaneously.

The size of the available field-of-view is no less than about 25 arcmin across, i.e. almost as large as the full moon. The individual fibres are moved and positioned "on the objects" in the field by means of the OzPoz positioner.

FLAMES has several different modes of operation. Two of these are of the simple "multi-object" type: each fibre collects the light from one star or galaxy - up to 132 objects can be observed simultaneously, cf. ESO Press Release eso0225 . In this respect, GIRAFFE provides absolutely unique possibilities for detailed observations of the properties (age, chemical composition, rotation and space velocity) of individual stars located in the main disk, central bulge or halo of our Milky Way galaxy (ESO Press Release eso0225), and also of stars in other galaxies of the Local Group.

Another observational mode is known as "3-D spectroscopy" or "integrated field". This consists of obtaining simultaneous spectra of smaller areas of extended objects like galaxies or nebulae. For this, 15 deployable fibre bundles, the so-called Integral Field Units (IFUs), cf. ESO Press Release eso0203, are used. Each IFU is a microscopic, state-of-the-art two-dimensional lens array with an aperture of 3 x 2 arcsec 2 on the sky. It is like an insect's eye, with twenty micro-lenses coupled with optical fibres leading the light recorded at each point in the field to the entry slit of the spectrograph.

The FLAMES facility, once in full operation after further testing and fine-tuning later this year, will enormously increase the possibilities to study stellar physics and the evolution of galaxies, two of the cornerstones in our understanding of the structure and evolution of the Universe.

With the great light-gathering capacity of the VLT, FLAMES will be able to gather very comprehensive information about even rather faint objects, enabling the astronomers to study them in a degree of detail so far reserved for brighter, nearby stars.

The quality of the first spectra from GIRAFFE, although far from exploiting the ultimate potential of the new facility, fully confirm these expectations.

[1] This is a joint Press Release of ESO and the Observatoire de Paris. 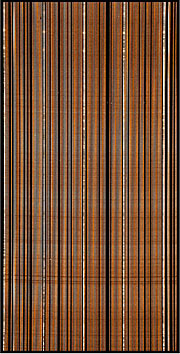