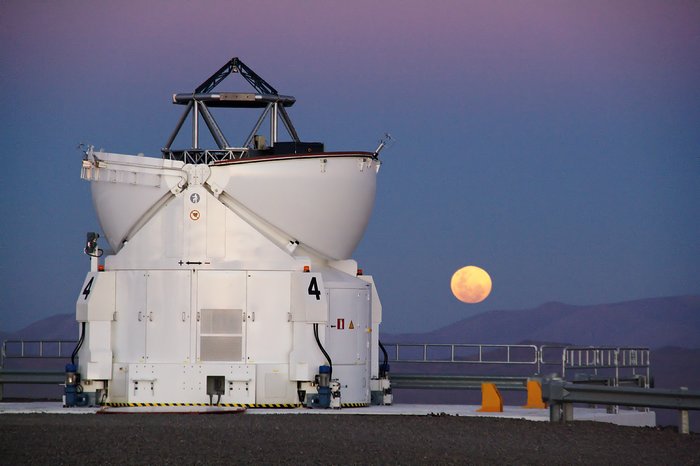 Deep in the heart of the Atacama Desert, home of the Paranal Observatory, the Sun is setting at the start of another clear night. This charming photograph, taken by ESO Photo Ambassador Gianluca Lombardi shows one of four Auxiliary Telescopes (ATs) that belong to ESO’s Very Large Telescope (VLT) sitting boldly against a vivid sky of pink and blue. The full Moon, seen hovering over the horizon, has a distinctly reddish hue, a phenomenon caused by the scattering of light by Earth’s atmosphere.

When the Moon is close to the horizon, the light we see from it must travel through a greater thickness of the atmosphere, so the effects of scattering are increased. As red light is more resilient to scattering than green or blue, our view of the Moon is reddened. As it happens, the reddening effect is somewhat less pronounced at sites like Paranal, as the clear air contains fewer particles that cause scattering. In addition to this, Paranal’s isolated location, far from civilisation and hence sources of light pollution, makes it a perfect place for ground-based astronomy.

The 1.8-metre Auxiliary Telescopes are integral to the VLT Interferometer (VLTI). Whereas the Unit Telescopes are very often engaged in independent activities, the ATs devote all their time to the interferometer. One advantage of this is that the ATs can be used for regular, long-term monitoring observations, which allow exceptionally precise measurements to be made of object positions; this is known as the Narrow Angle Astrometry mode of the VLTI. The ATs telescopes are mobile and able to relocate between 30 different observing positions. By utilising the entire Paranal platform this way, a separation of 202 metres between ATs is possible — the longest baseline of the VLTI.