The construction of the largest optical telescope in the world, the ESO Very Large Telescope (VLT) , continues at full speed, aiming at first-light towards the end of 1997. There is hectic activity on all fronts, both at the Paranal Observatory in Chile and at the many involved industrial firms in Europe.

The main structure of the VLT is the mechanical frame which holds the primary, secondary and tertiary mirrors aligned during the pointing and tracking of an astronomical object.

The structure is composed of the fork (in blue) and the tube (silver). The fork turns around the vertical axis (azimuth), the tube turns around the axis passing through the shafts (altitude) which can be seen in the central square section (centrepiece).

The motion is actuated via segmented motors, directly mounted around the two axes. The altitude drives, of 2.6-m diameter, can be seen resting on the fork close to the centrepiece, the azimuth tracks are below the platform and have a dameter of about 8 m. The drives, expressly developed for the VLT, are now used also for high performance precision lathes.

The angular position of the fork and the tube are measured by angular encoder based on the interferometric principle; they are directly mounted on the axes. The accuracy of the encoder will be within the 0.1 arcsecond. Also the encoder has been expressly developed for the VLT and it is the first time that such a principle, already used for linear measurements, is used to measure angles.

The main structure weighs about 430 tonnes, and turns on hydrostatic bearing pads to provide a smooth, undisturbed movement of the telescope. Before the telescope can be used, the primary mirror of 8.2-m diameter will replace the concrete dummy attached at the bottom of the tube and the tertiary mirror will be mounted so that it will guide the light to the instruments placed on the platforms on either side of the centrepiece. The secondary mirror will also be mounted instead of the concrete cylinder now mounted at the top of the tube.

The main structure now mounted in Milano will undergo testing at the beginning of November. From mid-Novemeber it will be available to ESO for testing the control electronics and software. 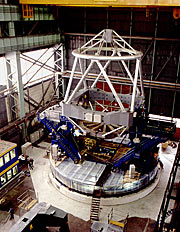 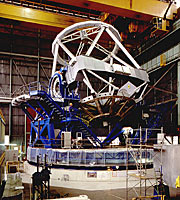 Afbeelding eso9639b
Construction of VLT main structure
Send us your comments!
Subscribe to receive news from ESO in your language
Accelerated by CDN77
Terms & Conditions