Stellar cluster NGC 1850 in the LMC 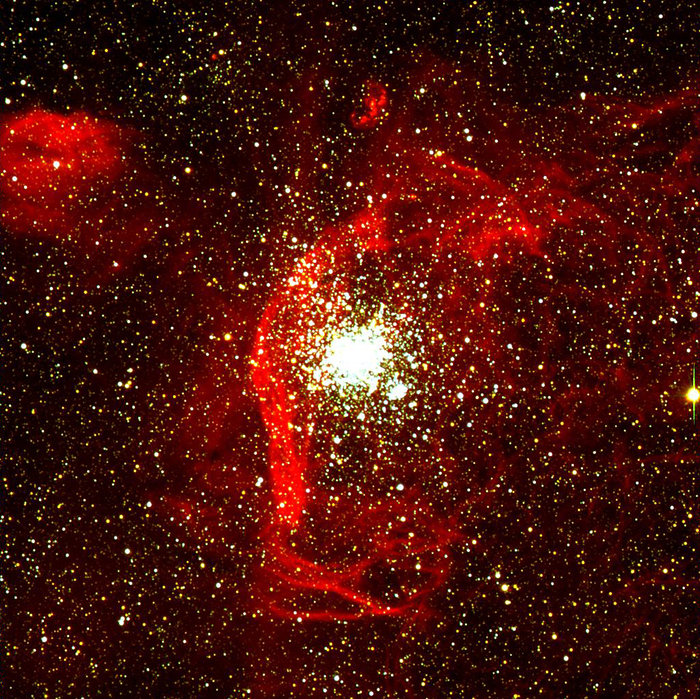 Colour a composite of three individual exposures, taken with FORS1 at the VLT UT1 on 3 February 1999. They were obtained through B (blue), V (green), and H-alpha (red) filters, and each of them was bias-subtracted and flat-fielded before combination. The field-of-view is 6.8 x 6.8 arcmin 2, corresponding to an area of just over 300 x 300 light-years 2 at the distance of the Large Magellanic Cloud. The exposure times were 60, 60 and 450 seconds and the image quality was 1.0, 0.7 and 0.8 arcsec (FWHM) for the B, V, and H-alpha frames, respectively. The intensity scale is linear for the B and V images and logarithmic for H-alpha, in order to enhance the fine structure of the faintest parts of the nebulosity. North is 33° to the right of the vertical. It is a composite of blue and green images plus an image in the light of Hydrogen. It shows that there is indeed still much gas around NGC 1850. While part of this may well be the remnant of the "parent" gas cloud (i.e. the one from which both clusters were born), the presence of filaments and of various sharp "shocks", e.g. to the left and below NGC 1850, offers support to the theory of supernova-induced star birth in the younger of the two clusters. Some "protostars" are located near or in some of the filaments — this is interpreted as additional evidence for that theory. The nebulosity directly above the main cluster, that is shaped like a "3", is the well-known supernova remnant N103B which itself may also be associated with NGC 1850.