A Faint and Lonely Brown Dwarf in the Solar Vicinity

Brown Dwarfs are star-like objects which are too small to become real stars, yet too large to be real planets. Their mass is too small to ignite those nuclear processes which are responsible for the large energies and high temperatures of stars, but it is much larger than that of the planets we know in our solar system. Until now, very few Brown Dwarfs have been securely identified as such. Two are members of double-star systems, and a few more are located deep within the Pleiades star cluster. Now, however, Maria Teresa Ruiz of the Astronomy Department at Universidad de Chile (Santiago de Chile), using telescopes at the ESO La Silla observatory, has just discovered one that is all alone and apparently quite near to us. Contrary to the others which are influenced by other objects in their immediate surroundings, this new Brown Dwarf is unaffected and will thus be a perfect object for further investigations that may finally allow us to better understand these very interesting celestial bodies. It has been suggested that Brown Dwarfs may constitute a substantial part of the unseen dark matter in our Galaxy. This discovery may therefore also have important implications for this highly relevant research area.

Searching for nearby faint stars

The story of this discovery goes back to 1987 when Maria Teresa Ruiz decided to embark upon a long-term search (known as the Calan-ESO proper-motion survey) for another type of unusual object, the so-called White Dwarfs, i.e. highly evolved, small and rather faint stars. Although they have masses similar to that of the Sun, such stars are no larger than the Earth and are therefore extremely compact. They are particularly interesting, because they most probably represent the future end point of evolution of our Sun, some billions of years from now.

For this project, the Chilean astronomer obtained large-field photographic exposures with the 1-m ESO Schmidt telescope at La Silla, each covering a sky area of 50.5 x 50.5. When comparing plates of the same sky field obtained at time intervals of several years [1], she was able to detect, among the hundreds of thousands of stellar images on the plates, a few faint ones whose positions had changed a little in the meantime. The search technique is based on the fact that such a shift is a good indicator of the object being relatively nearby. It must therefore also be intrinsically faint, i.e. a potential White Dwarf candidate.

On every pair of plates, approximately twenty faint moving objects were detected with proper motions [2] of more than 0.25 arcsec per year. Indeed, follow-up spectroscopic observations showed that about 20 percent of these or about four per plate were White Dwarfs. Until now, a total of forty new White Dwarfs have been discovered during this very successful project, i.e. over ten times more than originally expected.

And then - a Brown Dwarf!

When checking two plates with a time inverval of 11 years, Maria Teresa Ruiz earlier this year discovered a very faint object in the southern constellation of Hydra (The Water-Snake), moving at 0.35 arcsec per year (cf. ESO Press Photo eso9709). In order to establish its true nature, she obtained its spectrum (in the visual to near-infrared region from wavelengths 450-1000 nm) on March 15 using the ESO 3.6-m telescope and the EFOSC1 spectrograph.

To her great surprise, the spectrum was of a type never seen before and certainly not that of a White Dwarf or any other easily identifiable type of star (cf. ESO Press Photo eso9709). In particular, there were no signs of spectral bands of titanium oxide (TiO) or vanadium oxide (VO) which are common in very cool stars, nor of the spectral lines seen in White Dwarfs. On the other hand, an absorption line of the short-lived element lithium was identified, as well as a hydrogen line in emission.

However, when the colour of this mysterious object was measured in different wavebands, it was found to be very red and quite similar to that of one of the two known Brown Dwarfs in double star systems. The presence of the lithium line in the spectrum is also an indication that it might be of that type.

The astronomer now decided to give the new object the name KELU-1 ; this word means 'red' in the language of the Mapuche people, the ancient population in the central part of Chile. Its visual magnitude is 22.3, i.e. more than 3 million times fainter than what can be seen with the unaided eye.

The nature of Brown Dwarfs

Brown Dwarfs are first of all characterised by their low mass. When a body of such a small mass is formed in an interstellar cloud and subsequently begins to contract, its temperature at the centre will rise, but it will never reach a level that is sufficient to ignite the nuclear burning of hydrogen to helium, the process that it is main source of energy in the Sun and most other stars. The Brown Dwarf will just continue to contract, more and more slowly, and it will eventually fade from view.

This is also the reason that some astronomers consider Brown Dwarfs in the Milky Way and other galaxies as an important component of the 'dark matter' whose presence is infered from other indirect measurements but has never been directly observed.

It is assumed that the mass limit that separates nuclear-burning stars and slowly contracting Brown Dwarfs is at about 90 times the mass of the giant planet Jupiter, or 8 percent of that of the Sun.

Assuming that KELU-1 is identical to other known Brown Dwarfs, its measured characteristics indicate that it must be located at a distance of only 10 parsecs, that is about 33 light-years, from the solar system. Its temperature is obviously below 1700 degrees C (where TiO and VO condense as dust grains [3] so that the spectral lines of these molecules are no longer seen). Its mass can be no more than 75 times that of Jupiter, or 6 percent of that of the Sun.

During recent years, several Brown Dwarf candidates have been de-masked as low-mass stars and only recently a few Brown Dwarfs were identified in the Pleiades star cluster. Those Brown Dwarfs are quite young and therefore comparatively hotter and brighter.

Contrarily, KELU-1 is most probably somewhat older and its unique location so close to us greatly facilitates future investigations. Moreover, it is not at all 'disturbed' by the presence of other objects in its immediate surroundings, as this is the case for all other known objects of this type.

It will now be important to obtain accurate measurements of KELU-1's parallax, that is, the small annual change of its position in the sky that is caused by the Earth's motion around the Sun and thus the viewing angle of an Earth-based observer. This should be possible within the next year.

Moreover, high resolution spectral investigations with large telescope facilities, soon to include the ESO Very Large Telescope at the Paranal observatory in northern Chile, will now for the first time enable us to investigate the processes that take place in the relatively cold upper layers of Brown Dwarfs. For instance, the observed presence of lithium shows that its atmosphere must be different from that of low-mass stars.

KELU-1 and the 'Dark Matter'

From the fact that KELU-1 is so faint that it was barely detectable on the ESO Schmidt plates, it is possible to estimate that the total volume so far surveyed for this type of objects by this research programme is rather small, only about 23 cubic parsecs (800 cubic light-years). A further consideration of the search statistics indicates that less than 10 percent of the Brown Dwarfs present in the surveyed volume would have been found. This translates into a local density of about 0.4 such objects per cubic parsec.

Although the mass density of Brown Dwarfs derived from this estimate is insufficient to constitute all the 'dark matter' in the Milky Way Galaxy, it is consistent with the most recent estimates of the local mass density, both observed and as infered from dynamical considerations of the motions of stars in the solar neighborhood.

[1] This is done by means of a so-called blink-comparator , an optical device in which the two plates are placed. A tilting mirror allows to view the same sky field alternately on the two plates. Any celestial object that has changed its position will appear to `jump' back and forth and can thus be identified.

[2] A proper motion in the sky of 0.25 arcsec/year corresponds to a transversal speed of about 12 km/sec if the object is located at a distance of 10 parsec, or 32.6 light-years. The largest known proper motion of an object outside the solar system is that of Barnard's Star at about 10 arcsec/year.

[3] For instance, as the mineral perovskite . 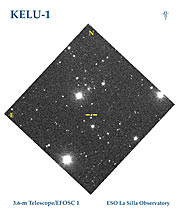 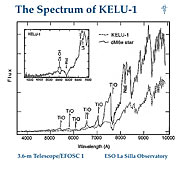