Sorry! This page is not yet available in your preferred language, so we're displaying the original version instead.
European
Southern
Observatory

Behind the scenes at ESO: Showing you the road to the stars
What you’ll discover in this blog post:
Today, the Event Horizon Telescope team announced that they have “imaged” a black hole for the first time ever. The black hole lies 55 million light-years away at the centre of the massive galaxy Messier 87. Such an incredible feat has taken decades of collaboration between people and telescopes around the world — requiring patience, persistence and perseverance. And the story doesn’t end here. Rubén Herrero-Illana and Hugo Messias, two ESO/ALMA fellows, tell us about how they were involved at the front line of this endeavour, and about the enormous efforts involved in such an astonishing achievement.

Q. Firstly, could you tell us a bit more about the Event Horizon Telescope?

Rubén Herrero-Illana (RHI): The Event Horizon Telescope — or EHT — is an experiment that uses eight telescopes around the world to observe some of the closest supermassive black holes with an unprecedented resolution. The scientific goal of the EHT is to find out what happens in the extreme environments around supermassive black holes, which are some of the most intriguing objects in the Universe.

The EHT uses a technique called very long baseline interferometry (VLBI), in which we make several radio telescopes, separated by thousands of kilometres, observe the same object in the sky simultaneously. By combining the signals from each telescope in a particular way, we are able to mimic a telescope as large as the Earth. To explain just how amazing this is — the resolution that we obtain this way would allow us to stand in Chile and see through the eye of a needle in Spain!

The participating stations in the EHT include ESO’s APEX telescope and ALMA, which ESO is a partner in.

Consisting of 66 antennas, ALMA is revolutionising the way that we see the Universe. As well as helping to image black holes, ALMA gives astronomers an unprecedented capability to study the cool Universe — molecular gas and dust as well as the relic radiation of the Big Bang. ALMA studies the building blocks of stars, planetary systems, galaxies, and life itself.
Credit: ESO/S. Guisard (www.eso.org/~sguisard)

Q. What were your roles in the project?

RHI: For the last two years, we have been involved in the preparation and execution of the observations at ALMA. This involves actually observing on site using the telescope. We have also been part of the group that calibrates the ALMA data and checks their quality before sending them to the correlators, which are the supercomputers th combine the signals from every station.

Q. What do you mean by ‘calibrating’ the data?

Hugo Messias (HM): We correct the raw data from the telescope for any system imperfection or inhomogeneous behavior. There are many things to correct for: for example, light is distorted and partially absorbed as it travels through Earth’s turbulent atmosphere, making the image blurrier and fainter. And even though the telescope system is state-of-the-art, it may introduce other imperfections in the light we receive from the Universe. We need to correct for all of these things to ensure that we have great data! 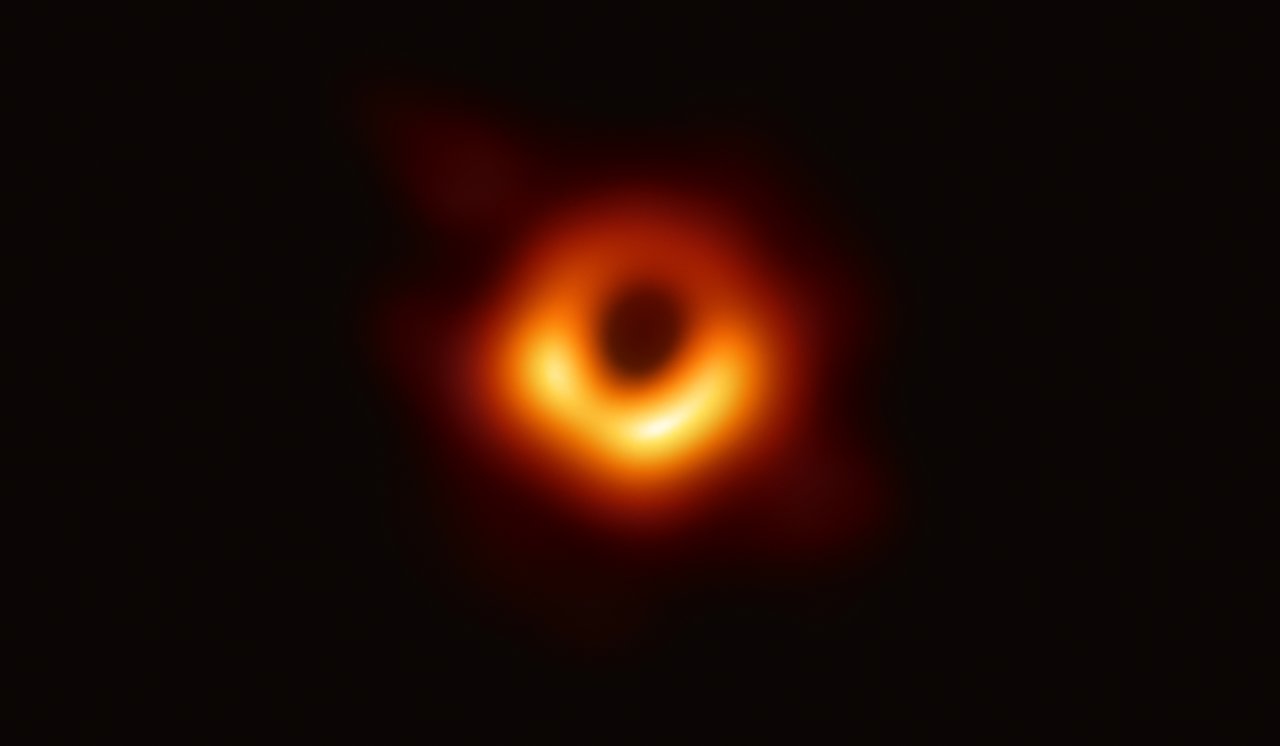 The shadow of a black hole seen here is the closest we can come to an image of the black hole itself, a completely dark object from which light cannot escape. The black hole’s boundary — the event horizon from which the EHT takes its name — is around 2.5 times smaller than the shadow it casts and measures just under 40 billion kilometres across.
Credit: EHT Collaboration 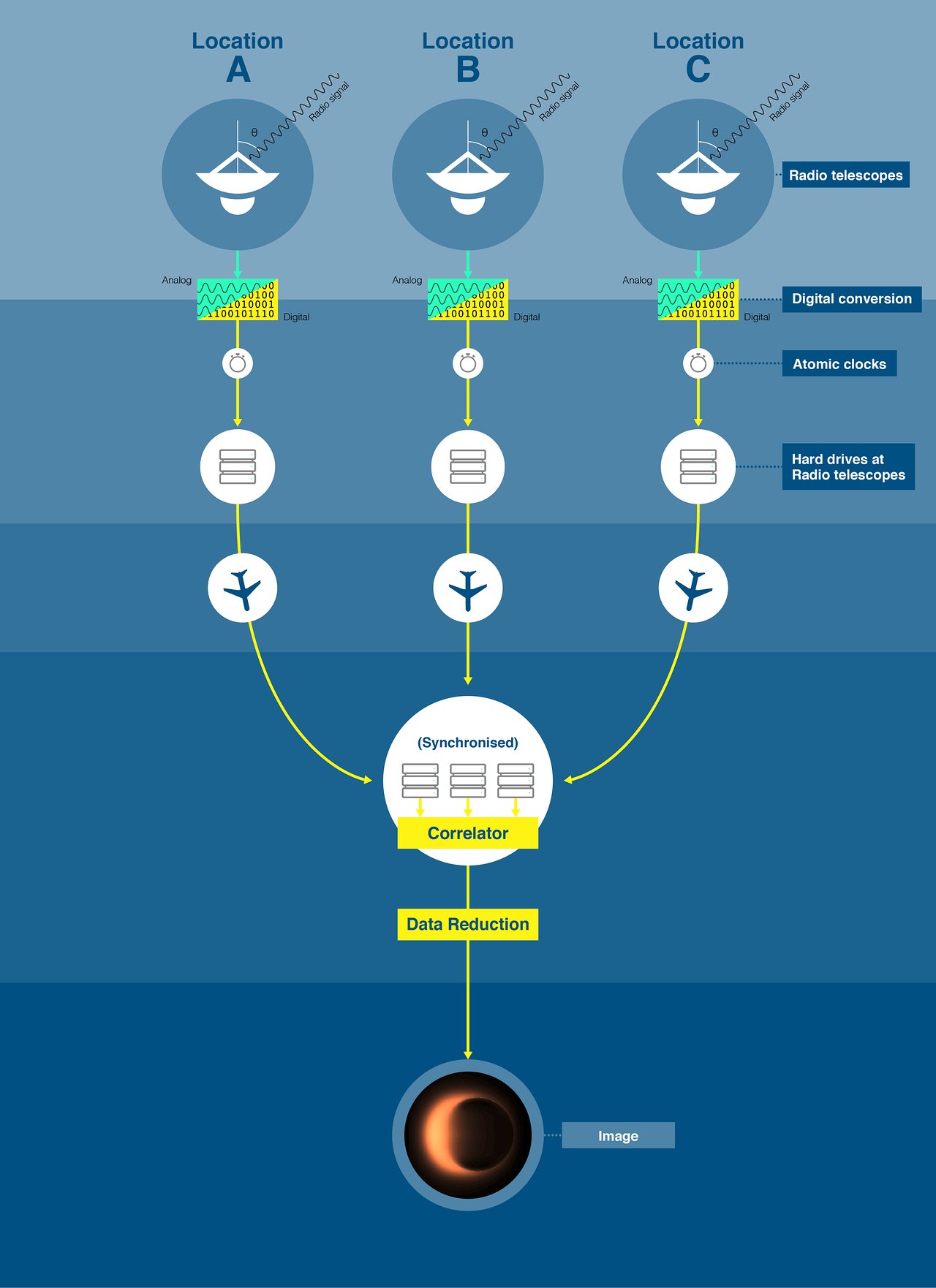 Analogue signals collected by the antenna are converted to digital signals and stored on hard drives together with the time signals provided by atomic clocks. The hard drives are then flown to a central location to be synchronised.
Credit: ALMA (ESO/NAOJ/NRAO), J.Pinto & N.Lira

Q. So has it been difficult to schedule observations of the black hole at the centre of Messier 87?

RHI: Yes! The individual telescopes that make up the EHT are not fully dedicated to the EHT project; they are cutting-edge telescopes that astronomers use all year long to observe a variety of different objects. Once per year, all these telescopes agree to create a gap in their schedules to observe together as part of the EHT. But the observing time is very limited.

During observing campaigns, we must decide every day if an observation is going to be triggered or if we are going to wait until the next day. If we decide to wait, all stations will continue their usual observations, but if we get the green light, everyone will observe the agreed black hole targets and a part of the valuable time set aside for the EHT is consumed. This decision is mainly based on the weather forecast, and it is a tough one. After all, it is not that common to have good weather in so many places in both hemispheres at the same time! Furthermore, there are some small details that make things even more interesting. For instance, communication with the South Pole Telescope in the middle of Antarctica is not steady, but restricted to the limited windows when telecommunication satellites pass above the telescope. Last minute decisions are not always an option.

HM: During the observations, a plan is sketched and distributed among all observing facilities. This schedule has to be followed to very precise timings, so we know that all telescopes are pointing at the same source at the same time. When finished, the data obtained are sent to the data-combining correlators. The challenge is that some of the stations might have been shut due to poor weather conditions, or that the data take months to arrive. An extreme example of the latter is that data from the South Pole Telescope arrive at the correlators only 6–8 months after observation!

Q. Thirteen partner organisations and more than 200 people are involved in this project. Why does it require such a huge international effort?

HM: Imaging a black hole is incredibly difficult. Even though the black hole at the centre of Messier 87 is 6.5 billion times the mass of the Sun, it is very dense, and therefore relatively small. And it is 55 million light-years away, so from Earth it looks tiny! We have been trying to image the event horizon — the ‘point of no return’ around a black hole, beyond which light can’t escape. But to discern something so small, we need a huge telescope. And as we are measuring light that has wavelengths on the order of millimetres, we need a telescope the size of the Earth! This is physically impossible, so we used interferometry — which is the same technique that ALMA uses on a smaller scale — to connect telescopes around the globe to mimic an Earth-sized telescope. And that takes a huge international effort.

Q. How are the telescopes synchronised?

RHI: When using the technique of interferometry, it is essential to combine the signals from each telescope at the exact same time. One way to ensure the synchronisation is to connect every station with a fibre-optic link to a central supercomputer. But considering the remote locations of the EHT telescopes, this would clearly not have been an option! Instead, each telescope was equipped with an ultra-precise hydrogen maser atomic clock that precisely timed each observation. This made it possible to combine data later on. 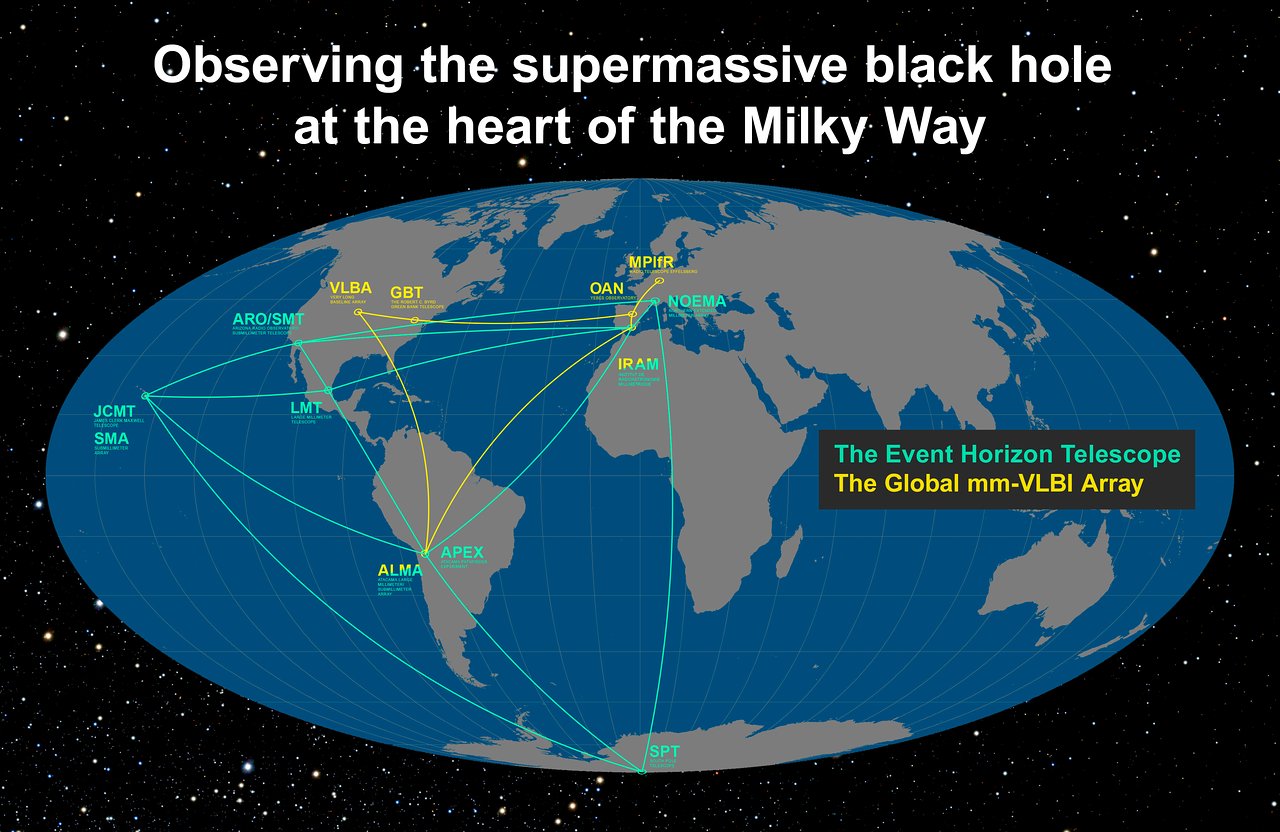 The locations of the participating telescopes of the Event Horizon Telescope (EHT) and the Global mm-VLBI Array (GMVA).
Credit: ESO/O. Furtak

Q. Was it difficult to collaborate with other institutions all around the world?

RHI: There are always challenges in coordination and communication among the many different people working in an observatory: astronomers, engineers, administrators and computing teams, to name just a few. Everyone must work together towards the same goal. ALMA is a huge observatory, with hundreds of workers from more than ten different countries, and some of the other observatories involved in the EHT project are almost as big. Now imagine eight of these observatories working together on a time critical, cutting-edge project, and you will get a grasp of how much fun a project like the EHT can be!

Q. How does it feel to be part of an international collaboration that has made such an incredible discovery?

HM: I feel honoured, proud, fulfilled, and hopeful. The latter is more related to the fact that we are showing that, despite the cultural differences, a team comprising individuals with distinct backgrounds had a common goal, and achieved it. That teaches the world another key lesson, besides the one being reported.

Q. Is there anything else you would like to mention?

HM: Aside from the people included in the author list of the papers, many other individuals enabled this discovery to happen. We are not only "standing on the shoulders of giants" who carved out the path towards the techniques and technology we currently use, but also on shoulders of hard-working people who build and maintain the antennas, correlators and software at these remote sites. This is what enabled the discovery to happen. To them, I say a big thank you, as well as to the curious society that provided the will and, of course, the funding. These contributions were key to making this feat a reality!

Rubén Herrero-Illana is an ESO fellow in Santiago de Chile with duties at ALMA since September 2016. He obtained his PhD in 2014 at the Instituto de Astrofísica de Andalucía, in Granada, Spain. His main expertise is studying merging galaxies by combining measurements of light at different wavelengths. In particular, he is interested in the correlation between supermassive black holes and star formation processes.

Hugo Messias has been an ALMA Fellow in Santiago de Chile since September 2016. He is from Portugal, where he obtained his PhD in 2011 at the University of Lisbon, followed by post-doc experiences at Universidad de Concepción (Chile), and the Institute of Astrophysics and Space Sciences (Portugal). His main scientific focus has been on unveiling dusty environments in galaxies, be that extreme star-forming regions or accreting supermassive black holes, and investigating their role in shaping galaxy evolution.