The Cosmic Dance of Distant Galaxies

GIRAFFE at VLT reveals the turbulent life of distant galaxies

Studying several tens of distant galaxies, an international team of astronomers found that galaxies had the same amount of dark matter relative to stars 6 billion years ago as they have now. If confirmed, this suggests a much closer interplay between dark and normal matter than previously believed. The scientists also found that as many as 4 out of 10 galaxies are out of balance. These results shed a new light on how galaxies form and evolve since the Universe was only half its current age.

"This may imply that collisions and merging are important in the formation and evolution of galaxies", said François Hammer, Paris Observatory, France, and one of the leaders of the team [1].

The scientists were interested in finding out how galaxies that are far away - thus seen as they were when the Universe was younger - evolved into the ones nearby. In particular, they wanted to study the importance of dark matter in galaxies.

"Dark matter, which composes about 25% of the Universe, is a simple word to describe something we really don't understand," said Hector Flores, co-leader. "From looking at how galaxies rotate, we know that dark matter must be present, as otherwise these gigantic structures would just dissolve."

In nearby galaxies, and in our own Milky Way for that matter, astronomers have found that there exists a relation between the amount of dark matter and ordinary stars: for every kilogram of material within a star there is roughly 30 kilograms of dark matter. But does this relation between dark and ordinary matter still hold in the Universe's past?

This required measuring the velocity in different parts of distant galaxies, a rather tricky experiment: previous measurements were indeed unable to probe these galaxies in sufficient detail, since they had to select a single slit, i.e. a single direction, across the galaxy.

Things changed with the availability of the multi-object GIRAFFE spectrograph [2], now installed on the 8.2-m Kueyen Unit Telescope of ESO's Very Large Telescope (VLT) at the Paranal Observatory (Chile).

In one mode, known as "3-D spectroscopy" or "integral field", this instrument can obtain simultaneous spectra of smaller areas of extended objects like galaxies or nebulae. For this, 15 deployable fibre bundles, the so-called Integral Field Units (IFUs) are used to make meticulous measurements of distant galaxies. Each IFU is a microscopic, state-of-the-art two-dimensional lens array with an aperture of 3 x 2 arcsec2 on the sky. It is like an insect's eye, with twenty micro-lenses coupled with optical fibres leading the light recorded at each point in the field to the entry slit of the spectrograph.

"GIRAFFE on ESO's VLT is the only instrument in the world that is able to analyze simultaneously the light coming from 15 galaxies covering a field of view almost as large as the full moon," said Mathieu Puech, lead author of one the papers presenting the results [3]. "Every galaxy observed in this mode is split into continuous smaller areas where spectra are obtained at the same time."

The astronomers used GIRAFFE to measure the velocity fields of several tens of distant galaxies, leading to the surprising discovery that as much as 40% of distant galaxies were "out of balance" - their internal motions were very disturbed - a possible sign that they are still showing the aftermath of collisions between galaxies.

When they limited themselves to only those galaxies that have apparently reached their equilibrium, the scientists found that the relation between the dark matter and the stellar content did not appear to have evolved during the last 6 billions years.

Thanks to its exquisite spectral resolution, GIRAFFE also allows for the first time to study the distribution of gas as a function of its density in such distant galaxies. The most spectacular results reveal a possible outflow of gas and energy driven by the intense star-formation within the galaxy and a giant region of very hot gas (HII region) in a galaxy in equilibrium that produces many stars.

"Such a technique can be expanded to obtain maps of many physical and chemical characteristics of distant galaxies, enabling us to study in detail how they assembled their mass during their entire life," said François Hammer. "In many respects, GIRAFFE and its multi-integral field mode gives us a first flavour of what will be achieved with future extremely large telescopes."

[2] This complex and unique instrument allows obtaining high-quality spectra of a large variety of celestial objects, from individual stars in the Milky Way and other nearby galaxies, to very distant galaxies. It functions by means of multiple optical fibres that guide the light from the telescope's focal plane into the entry slit of the spectrograph. Here the light is dispersed into its different colours. GIRAFFE and these fibres are an integral part of the advanced Fibre Large Array Multi-Element Spectrograph (FLAMES) facility which also includes the OzPoz positioner and an optical field corrector. It is the outcome of a collaboration between ESO, Observatoire de Paris-Meudon, Observatoire de Genève-Lausanne and the Anglo Australian Observatory (AAO). More details are available in eso0203. The principle of this instrument involves the positioning in the telescope's focal plane of a large number of optical fibres. This is done in such a way that each of them guides the light from one particular celestial object towards the spectrograph that records the spectra of all these objects simultaneously. The size of the available field-of-view is no less than about 25 arcmin across, i.e. almost as large as the full moon. The individual fibres are moved and positioned "on the objects" in the field by means of the OzPoz positioner. See also eso0219. 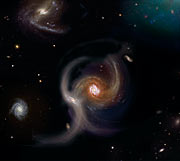 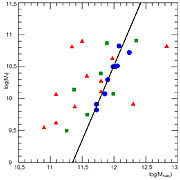 PR Billede eso0610c
Dark matter and stellar mass in distant galaxies
Send us your comments!
Subscribe to receive news from ESO in your language
Accelerated by CDN77
Regler og vilkår