Third Nucleus Observed with the VLT

New images from the VLT show that one of the two nuclei of Comet LINEAR (C/2001 A2), now about 100 million km from the Earth, has just split into at least two pieces. The three fragments are now moving through space in nearly parallel orbits while they slowly drift apart. This comet will pass through its perihelion (nearest point to the Sun) on May 25, 2001, at a distance of about 116 million kilometres. It has brightened considerably due to the splitting of its "dirty snowball" nucleus and can now be seen with the unaided eye by observers in the southern hemisphere as a faint object in the southern constellation of Lepus (The Hare).

Six weeks ago, it was suddenly observed to brighten (IAUC 7605 [1]). Amateurs all over the world saw the comparatively faint comet reaching naked-eye magnitude and soon thereafter, observations with professional telescopes indicated the reason for this strange behaviour: the comet's "dirty snowball" nucleus had split into two pieces (IAUC 7616 [1]).

During the splitting of the nucleus, fresh material from the interior of this frozen body is suddenly exposed to the sunlight, causing a rapid increase in the evaporation process. More cometary material is released and the overall brightness increases, as more sunlight is reflected off the dust around the nucleus.

But Comet LINEAR has just shown that it is good for another surprise. When astronomers at ESO's Paranal Observatory [2] turned the 8.2-metre VLT MELIPAL telescope (UT3) towards that object in the evening of May 14, they noted that one of the two pieces of the nucleus appeared somewhat elongated. The comet is rapidly approaching the Sun - it will pass through its perihelion (the point closest to the Sun) on May 25, and it was quite low in the sky (about 20° above the western horizon). Accordingly, the image quality was not perfect, but there was no doubt that something was going on with the fragment that was closest to the Sun (denoted "B").

And indeed, when the 8.2-metre VLT YEPUN telescope (UT4) obtained another image of the comet in the evening of May 16, it was obvious that fragment "B" had split into two, see ESO Press Photos eso0119. In fact, the astronomers suspect that there may be other, smaller pieces.

The ESO astronomers have reported their detailed findings in IAU Circular 7627 [1]. They also note that the shape of the bright cloud (the "coma") around components "B1" and "B2" is quite unsual - this is well visible on the false-colour ESO Press Photo eso0119b . They interpret this as the likely presence of a large amount of gas in addition to the dust around these fragments.

Material from the formation of the solar system

Comet LINEAR moves in an exceedingly elongated orbit and it is making one of its first approaches to the Sun, perhaps even the first one. It is therefore a "new" comet in which unaltered material from the formation of the solar system some 4.5 billion years ago may still be present. For this reason, the splitting of its nucleus is of particular interest to the astronomers: by spectroscopic observations, they may be able to observe directly such material and hence to learn more about the processes that took place at the time of the formation of the solar system.

Interested observers may find the location of this comet in the sky (the "ephemeris") at the May 2001 Events webpage at Sky & Telescope .

Results about the disintegration of another comet just published

Last year, the nucleus of another Comet LINEAR (designated C/1999 S4) disintegrated completely. It was observed extensively with the ESO VLT and the Hubble Space Telescope (HST), c.f. ESO Press Photo eso0026. Quite by chance, a series of research papers based on those and other observations of that comet are being published in today's issue of the research journal Science. 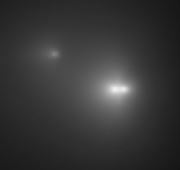 Image eso0119b
The break-up of comet LINEAR
Send us your comments!
Subscribe to receive news from ESO in your language
Accelerated by CDN77
Terms & Conditions