Discovery of a Satellite Around a Near-Earth Asteroid

In the course of the major observational programme of asteroids by the Institute of Planetary Exploration of the German Aerospace Research Establishment (DLR) [1] in Berlin, two of the staff astronomers, Stefano Mottola and Gerhard Hahn, have discovered a small satellite (moon) orbiting the asteroid (3671) Dionysus.

The new measurements were obtained with the DLR CCD Camera attached at the 60-cm Bochum telescope at the ESO La Silla Observatory in Chile.

This is only the second known case of an asteroid with a moon.

Until recently, natural satellites were only known around the major planets . The Moon orbits the Earth, there are two tiny moons around Mars, each of the giant planets Jupiter, Saturn, Uranus and Neptune has many more, and even the smallest and outermost, Pluto, is accompanied by one [2].

However, the new discovery now strengthens the belief of many astronomers that some, perhaps even a substantial number of the many thousands of minor planets (asteroids) in the solar system may also possess their own moons. The first discovery of a satellite orbiting an asteroid was made by the NASA Galileo spacecraft, whose imagery, obtained during a fly-by of asteroid (253) Ida in August 1993, unveiled a small moon that has since been given the name Dactyl.

Asteroid Dionysus [3] was put on the observing list because it belongs to a special class of asteroids, the members of which occasionally come very close to the Earth and have a small, but non-negligible chance of colliding with our planet. Most of these objects move in highly elliptical orbits that lie partly inside, partly outside that of the Earth. They are accordingly referred to as `Earth-crossing asteroids' or Apollo-type asteroids , after the proto-type of this group, (1862) Apollo, that was discovered in 1932 by Karl Reinmuth in Heidelberg [4].

The orbital characteristics of Dionysus lead to moderately close approaches to the Earth every 13 years, with the one in 1997 being the first since its discovery that is favourable for extensive observations. On July 6, 1997, it passed within 17 million km of our planet. At that time it was visible from the southern hemisphere with a moderately-sized telescope as a relatively fast-moving object.

The first observations of the brightness of this asteroid in late May 1997 showed a `normal' two-maxima-two-minima lightcurve (change of brightness with time), typical of rotating non-spherical bodies. The period of rotation was 2.7 hours, i.e., this asteroid spins almost nine times as fast as the Earth.

However lightcurves observed on two subsequent nights were strikingly different from the previous ones. In both cases a deeper and shifted dip was seen, indicative of an attenuation - an additional dimming of the sunlight reflected by the asteroid.

The observers hypothesised that these lightcurve features were due to an eclipse by an unknown object moving in an orbit around (3671) Dionysus , thereby covering part of the illuminated surface of the asteroid at regular time intervals [5]. Fortunately, this hypothesis can be checked, because the phenomenon should then repeat itself periodically.

Accordingly, the DLR scientists made a prediction for the next occurences of dips in the lightcurve, based on the time difference between the two observed events.

Confirmation of the satellite

Contacts were made with observers located at other observatories, in order to secure lightcurve coverage over a longer period of time than was possible from La Silla alone. As a result, a series of lightcurve measurements were performed from June 3 to 9 in close cooperation with Petr Pravec and Lenka Sarounova working at the Ondrejov Observatory, near Prague in the Czech Republic.

Luckily, the weather conditions were favourable at both sites and the dips in the lightcurve were indeed observed at the predicted times.

Based on the four well observed events, it was then possible to determine a period of 1.155 days for their occurence. Thus, the hypothesis of a satellite orbiting around Dionysus was confirmed. As a result, the International Astronomical Union's Minor Planet Center located in Cambridge (MA, USA) promptly gave a provisional designation to the new satellite - S/1997 (3671) 1 .

How big is Dionysus?

Meanwhile, in Hawaii, the world's largest infrared telescope was being trained on Dionysus to obtain information about its size and composition. Alan Harris, also a scientist from the DLR in Berlin, and John Davies from the Joint Astronomy Centre in Hilo, Hawaii, observed the thermal infrared radiation emitted by Dionysus with the 3.8-m United Kingdom Infrared Telescope (UKIRT) situated on Mauna Kea. Similar observations over a broader spectral range were also made by the European Space Agency's orbiting Infrared Space Observatory.

The thermal or "heat" radiation emitted by an asteroid depends on its size and the amount of sunlight it absorbs (darker bodies being warmer). In the case of Dionysus the measured radiation was much weaker than expected, indicating that the asteroid has an intrinsically bright (reflective) surface and is only about 1 km in diameter. This is much smaller than (253) Ida, the only other asteroid known to have a moon, which is about 60 km across.

Eventually it should be possible to determine the orbital radius of the satellite, its size and the inclination of its orbital plane. In order to obtain the data necessary for these determinations, observations will be continued during the present period of good visibility that lasts until September-October 1997. For this reason the discoverers have initiated an international observation campaign devoted to the study of this intriguing object and now involving astronomers from many countries.

How common are such satellites?

Satellites in orbit around small bodies in the solar system - asteroids and cometary nuclei - have been predicted on theoretical grounds for a long time, even though there is no consensus among planetary scientists about the actual numbers of such systems.

Hints about the existence of asteroid satellites also come from the presence of double impact craters on the Moon and other planetary surfaces. This suggests that the projectiles forming these craters were `double' asteroids. Moreover, measurements obtained when an asteroid passes in front of a relatively bright star (a so-called 'occultation') have on a few occasions shown features which could be interpreted as due to the presence of a satellite. However, because of the difficult nature of such measurements, it has never been possible to draw unambiguous conclusions.

The existence of double asteroids was invoked earlier by Petr Pravec and Gerhard Hahn to explain the unusual features observed in the lightcurves of two other Earth-approaching asteroids 1991 VH and 1994 AW1 . In the case of Dionysus , however, it is possible to predict eclipse events and to confirm them by subsequent measurements.

There is therefore mounting evidence that asteroid binary systems might be comparatively common. Observational programmes like the present one by the DLR and Ondrejov groups will help to verify this possibility.

[1] This institute and its parent organisation are known in Germany as Institut fuer Planetenerkundung and Deutsche Forschungsanstalt fuer Luft- und Raumfahrt e.V. (DLR) .

[3] Asteroids are small solid planetary bodies revolving around the Sun in orbits that are mostly located in the so-called Main Asteroid Belt, confined between the orbits of Mars and Jupiter. Most of them are thought to be fragments derived from catastrophic, past collisions between larger asteroids. By mid-1997, the orbits of about 8000 asteroids in the solar system were sufficiently well known to allow them to be officially numbered by the rules of the International Astronomical Union. (3671) Dionysus was discovered in 1984 at the Palomar Observatory (California, USA) and is named after the Greek god of wine.

[4] The gravitational influence of the giant planet Jupiter can modify the orbits of asteroids located in particular regions of the Main Belt (the effect is refered to as 'orbital perturbations'). As a result, the orbit of an asteroid may `cross' that of a major planet, and eventually it may become a NEO , i.e. a near-Earth object. The orbits of NEO's are highly unstable over times comparable to the age of the solar system. This instability can result in a collision with one of the terrestrial (inner) planets, or with the Sun, or in the ejection of the asteroid out of the solar system. The present orbit of (3671) Dionysus is such that this object is not likely to collide with the Earth in the foreseeable future.

[5] The method of analyzing the lightcurve of Dionysus consists of `removing' (subtracting) the normal short-period brightness variations due to rotation of the asteroid and plotting the residuals against time. The residual lightcurve shows a clear resemblance with typical lightcurves of eclipsing binary stellar systems (in which two stars move around each other, producing mutual eclipses) and leads to a model of two bodies revolving around a common gravitational centre, in an orbital plane containing both the Earth and the Sun.

Detailed and up-to-date information about (3671) Dionysus can be found in the Web at the following URL: http://earn.dlr.de/dionysus. 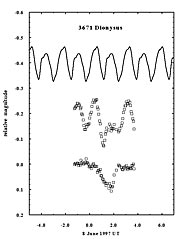