A team of astronomers using ESO’s Very Large Telescope has imaged a faint object moving near a bright star. With an estimated mass of four to five times that of Jupiter, it would be the least massive planet to be directly observed outside the Solar System. The discovery is an important contribution to our understanding of the formation and evolution of planetary systems.

Although nearly a thousand exoplanets have been detected indirectly — most using the radial velocity or transit methods [1] — and many more candidates await confirmation, only a dozen exoplanets have been directly imaged. Nine years after ESO's Very Large Telescope captured the first image of an exoplanet, the planetary companion to the brown dwarf 2M1207 (eso0428), the same team has caught on camera what is probably the lightest of these objects so far [2][3].

“Direct imaging of planets is an extremely challenging technique that requires the most advanced instruments, whether ground-based or in space,” says Julien Rameau (Institut de Planetologie et d'Astrophysique de Grenoble, France), first author of the paper announcing the discovery. “Only a few planets have been directly observed so far, making every single discovery an important milestone on the road to understanding giant planets and how they form.”

In the new observations, the likely planet appears as a faint but clear dot close to the star HD 95086. A later observation also showed that it was slowly moving along with the star across the sky. This suggests that the object, which has been designated HD 95086 b, is in orbit around the star. Its brightness also indicates that it has a predicted mass of only four to five times that of Jupiter.

The team used NACO, the adaptive optics instrument mounted on one of the 8.2-metre Unit Telescopes of ESO's Very Large Telescope (VLT). This instrument allows astronomers to remove most of the blurring effects of the atmosphere and obtain very sharp images. The observations were made using infrared light and a technique called differential imaging, which improves the contrast between the planet and dazzling host star.

The newly discovered planet orbits the young star HD 95086 at a distance of around 56 times the distance from the Earth to the Sun, twice the Sun–Neptune distance. The star itself is a little more massive than the Sun and is surrounded by a debris disc. These properties allowed astronomers to identify it as an ideal candidate to harbour young massive planets. The whole system lies some 300 light-years away from us.

The youth of this star, just 10 to 17 million years, leads astronomers to believe that this new planet probably formed within the gaseous and dusty disc that surrounds the star. “Its current location raises questions about its formation process. It either grew by assembling the rocks that form the solid core and then slowly accumulated gas from the environment to form the heavy atmosphere, or started forming from a gaseous clump that arose from gravitational instabilities in the disc.” explains Anne-Marie Lagrange, another team member. “Interactions between the planet and the disc itself or with other planets may have also moved the planet from where it was born.”

Another team member, Gaël Chauvin, concludes, “The brightness of the star gives HD 95086 b an estimated surface temperature of about 700 degrees Celsius. This is cool enough for water vapour and possibly methane to exist in its atmosphere. It will be a great object to study with the forthcoming SPHERE instrument on the VLT. Maybe it can also reveal inner planets in the system — if they exist.” [4]

[1] Astronomers have already confirmed the existence of nearly a thousand planets orbiting stars other than the Sun. Almost all were found using indirect methods that could detect the effects of the planets on their parent stars — the dips of brightness produced when planets crossed in front of them (the transit method), or the wobbling caused by the gravitational pull of planets in their orbits (the radial velocity method). So far, only a dozen exoplanets have been directly observed.

[2] Fomalhaut b may have a lower mass, but its brightness seems to be contaminated by light reflected from the surrounding dust, making the precise determination of its mass uncertain.

[3] This team also has observed an exoplanet around the star Beta Pictoris (eso1024), as well as several others.

[4] SPHERE is a second generation adaptive optics instrument that will be installed on the VLT in late 2013.

This research was presented in a paper entitled, “Discovery of a probable 4-5 Jupiter-mass exoplanet to HD95086 by direct-imaging”, to appear in the journal Astrophysical Journal Letters. 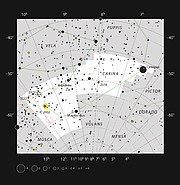 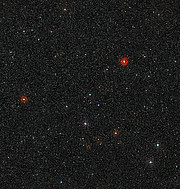 PR kép eso1324c
View of the sky around young star HD 95086
Send us your comments!
Subscribe to receive news from ESO in your language
Accelerated by CDN77
Szerződési feltételek