Astronomers using ESO’s Very Large Telescope have spotted a distant galaxy hungrily snacking on nearby gas. Gas is seen to fall inwards towards the galaxy, creating a flow that both fuels star formation and drives the galaxy’s rotation. This is the best direct observational evidence so far supporting the theory that galaxies pull in and devour nearby material in order to grow and form stars. The results will appear in the 5 July 2013 issue of the journal Science.

Astronomers have always suspected that galaxies grow by pulling in material from their surroundings, but this process has proved very difficult to observe directly. Now ESO’s Very Large Telescope has been used to study a very rare alignment between a distant galaxy [1] and an even more distant quasar — the extremely bright centre of a galaxy powered by a supermassive black hole. The light from the quasar passes through the material around the foreground galaxy before reaching Earth, making it possible to explore in detail the properties of the gas around the galaxy [2]. These new results give the best view so far of a galaxy in the act of feeding.

“This kind of alignment is very rare and it has allowed us to make unique observations,” explains Nicolas Bouché of the Research Institute in Astrophysics and Planetology (IRAP) in Toulouse, France, lead author of the new paper. “We were able to use ESO’s Very Large Telescope to peer at both the galaxy itself and its surrounding gas. This meant we could attack an important problem in galaxy formation: how do galaxies grow and feed star formation?”

Galaxies quickly deplete their reservoirs of gas as they create new stars, and so must somehow be continuously replenished with fresh gas to keep going. Astronomers suspected that the answer to this problem lay in the collection of cool gas from the surroundings by the gravitational pull of the galaxy. In this scenario, a galaxy drags gas inwards, which then circles around the galaxy, rotating with it before falling in. Although some evidence of such accretion had been observed in galaxies before, the motion of the gas and its other properties had not been fully explored up to now.

The astronomers used two instruments known as SINFONI and UVES [3], both of which are mounted on ESO’s VLT at the Paranal Observatory in northern Chile. The new observations showed both how the galaxy itself was rotating, and revealed the composition and motion of the gas outside the galaxy.

“The properties of this vast volume of surrounding gas were exactly what we would expect to find if the cold gas was being pulled in by the galaxy,” says co-author Michael Murphy (Swinburne University of Technology, Melbourne, Australia). “The gas is moving as expected, there is about the expected amount and it also has the right composition to fit the models perfectly. It’s like feeding time for lions at the zoo — this particular galaxy has a voracious appetite, and we’ve discovered how it feeds itself to grow so quickly.”

Astronomers have already found evidence of material around galaxies in the early Universe, but this is the first time that they have been able to show clearly that the material is moving inwards rather than outwards, and also to determine the composition of this fresh fuel for future generations of stars. Without the quasar’s light to act as a probe this surrounding gas would be undetectable.

“In this case we were lucky that the quasar happened to be in just the right place for its light to pass through the infalling gas. The next generation of extremely large telescopes will enable studies with multiple sightlines per galaxy and provide a much more complete view,” concludes co-author Crystal Martin (University of California Santa Barbara, USA).

[1] This galaxy was detected in the 2012 redshift z ~ 2 SINFONI survey called the SINFONI Mg II Program for Line Emitters (SIMPLE). The quasar in the background is called QSO J2246-6015, or HE 2243-60 and the galaxy itself lies at a redshift of 2.3285 — meaning that we are seeing it when the Universe was just about two billion years old.

[2] When the quasar light passes through the gas clouds some wavelengths are absorbed. The patterns of these absorption fingerprints can tell astronomers much about the motions and chemical composition of the gas. Without the quasar in the background far less information would have been be obtained — the gas clouds do not shine and are not visible in direct images.

[3] SINFONI is the Spectrograph for INtegral Field Observations in the Near Infrared, while UVES is the Ultraviolet and Visual Echelle Spectrograph. Both are mounted on ESO’s Very Large Telescope. SINFONI revealed the motions of the gas in the galaxy itself and UVES the effects of the gas around the galaxy on the light coming from the more distant quasar.

This research was presented in a paper entitled “Signatures of Cool Gas Fueling a Star-Forming Galaxy at Redshift 2.3”, to appear in the 5 July 2013 issue of the journal Science. 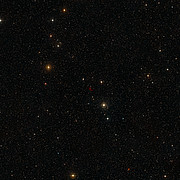 PR videó eso1330a
Zoom of an artist's impression of a galaxy accreting material from its surroundings
Send us your comments!
Subscribe to receive news from ESO in your language
Accelerated by CDN77
Szerződési feltételek