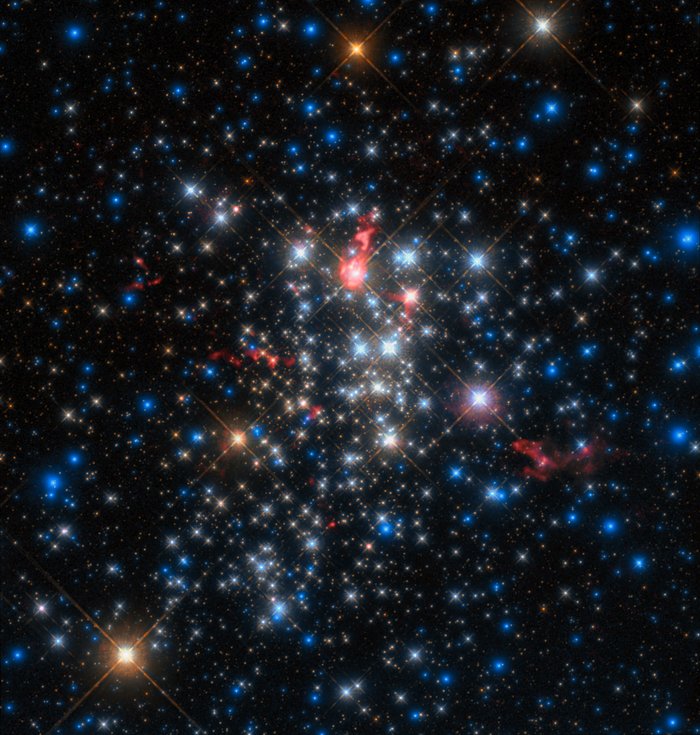 This spectacular Picture of the Week was produced from data gathered by the Atacama Large Millimeter/submillimeter Array (ALMA) in Chile, combined with data from the NASA/ESA Hubble Space Telescope. It shows a cluster of stars named Westerlund 1, one of the most massive young star clusters known to reside in the Milky Way.

Excitingly, it also shows the comet-like “tails” of material stretching away from some of the giant stars in Westerlund 1. Such tails are formed in the thick, relentless winds that pour from the cluster’s stellar residents, carrying material outwards.

This phenomenon is similar to how comets get their famous and beautiful tails. Comet tails in the Solar System are driven away from the nucleus of their parent comet by a wind of particles that streams out from the Sun. Consequently comet tails always point away from our Sun. Similarly, the tails of the huge red stars shown in this image point away from the core of the cluster, likely the result of powerful cluster winds generated by the hundreds of hot and massive stars found towards the centre of Westerlund 1.

These massive structures cover large distances and indicate the dramatic effect the environment can have on how the stars form and evolve.

These comet-like tails were detected during an ALMA study of Westerlund 1 that aimed to explore the cluster’s constituent stars and figure out how, and at what rate, they lose their mass. The cluster is known to host a large amount of massive stars, many of them intriguing and rare types, making it of great interest and use to astronomers wishing to understand the myriad stars in our galaxy.