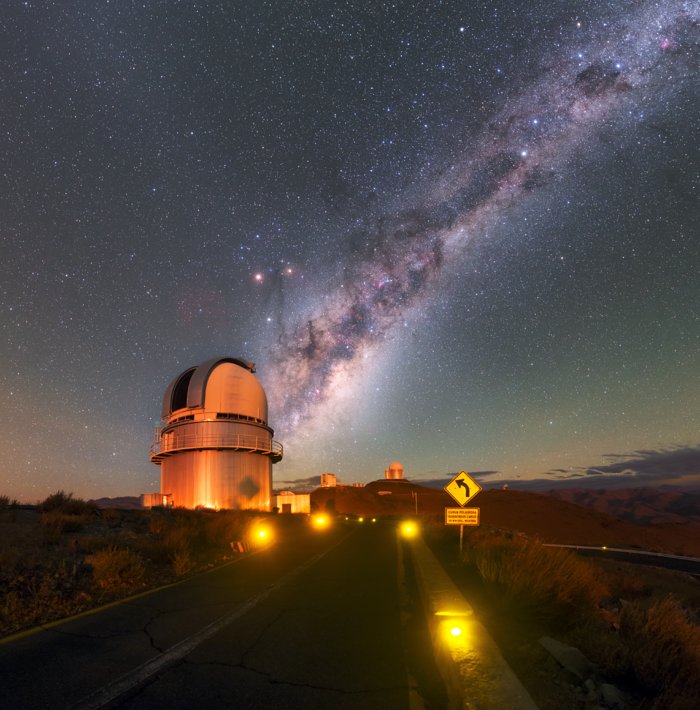 The road to ESO’s La Silla Observatory in the Chilean Atacama Desert appears to curve around the mountain and collide with the downward slope of the Milky Way in this Picture of the Week. Small yellow bulbs light up the road at regular intervals; it is prohibited to use headlights on these roads between dusk and dawn, as even dim lights can interfere significantly with telescope observations. The site enjoys some of the darkest night skies on Earth.

The darkness, high altitude, and resulting dry air at La Silla make it an exceptional location for astronomy. In the foreground of this image, the Danish 1.54-metre telescope is performing its nightly observations. Its instruments have allowed astronomers to achieve several “firsts”. In 2005, for example, astronomers observed the afterglows of short gamma-ray bursts and showed that the bursts are likely caused by the dramatic collision of two neutron stars, while in 2006 the telescope was part of a global network of telescopes that discovered an exoplanet just five times as massive as Earth.

A number of interesting objects populate the sky above the observatory. To the left, almost hidden behind the telescope, is the faint green glow of Comet 252P/LINEAR and, overhead, the tail of Scorpius curves into the glowing clouds of the Milky Way, keeping close company to Mars and Saturn. Further up the bright galactic band are two bright stars — the intriguing triple-star systems Alpha and Beta Centauri — and at the very top right of the image is the iconic diamond of the Southern Cross.