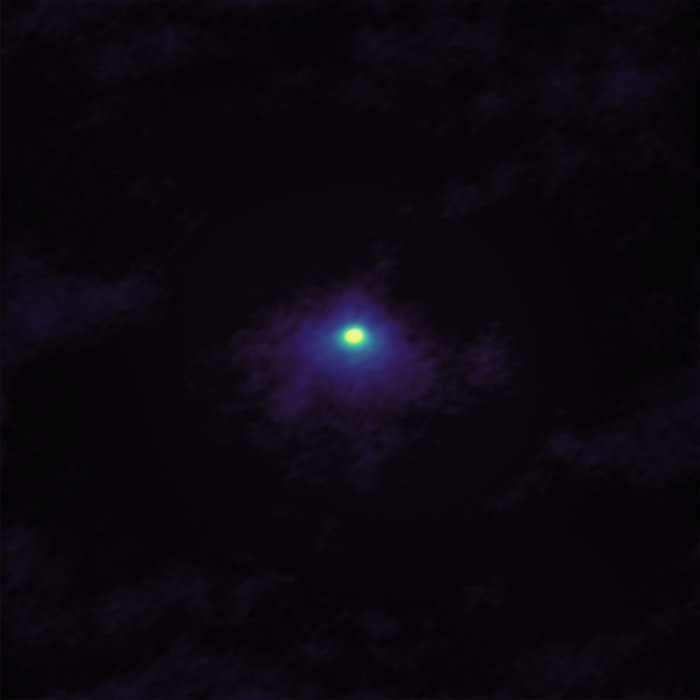 In December 2018, the comet 46P/Wirtanen passed within 11.6 million kilometres of the Earth — about 30 times the distance from the Earth to the Moon. This close pass gave astronomers the chance to observe the comet in detail, and ALMA (the Atacama Large Millimeter/submillimeter Array) took full advantage. ALMA’s speciality is observing the cooler components of the Universe, such as gas and dust, and the array often focuses on specific molecules. This image is no exception, as it highlights one key thing: the hydrogen cyanide gas in the coma around the comet’s nucleus.

But why would scientists be looking for an infamous poison? Well, it turns out that hydrogen cyanide is as common as mystery novels have led us to believe — throughout the cosmos, at least! Because it’s a simple organic molecule that forms relatively easily, it’s been observed in comets, stellar atmospheres, and the clouds of dust and gas that exist between stars. This image builds on those observations by showing clearly the hydrogen cyanide emanating from the nucleus of this comet. Further ALMA observations showed that other, more complex organic molecules were present, too.

This matters because, while it may be poisonous to many organisms on Earth today, hydrogen cyanide may have played an important role in getting life started on Earth. It’s very reactive, so it easily interacts with surrounding chemicals to create new molecules — including some of those essential for life, such as amino acids. One theory posits that hydrogen cyanide, brought here in part by comets, jump-started organic chemistry here on Earth, eventually leading to the beginning of life. ALMA’s imaging of 46P/Wirtanen further supports the idea that comets could have brought this life-giving material to the early Earth.