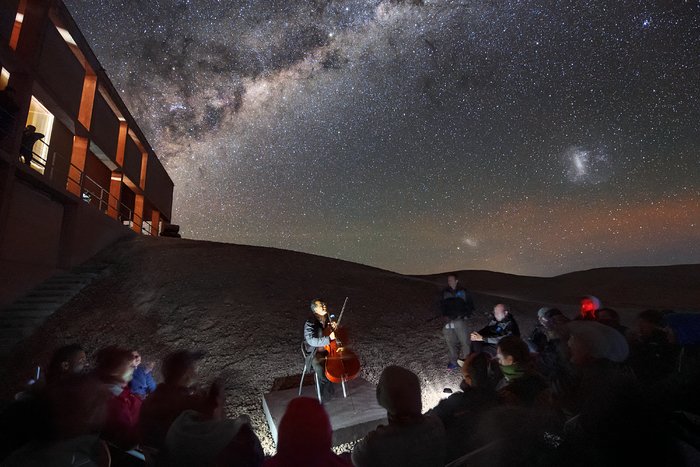 In a once-in-a-lifetime opportunity, staff at ESO’s Paranal Observatory were treated to a unique performance by the world-renowned cellist Yo-Yo Ma. On 1 May 2019, the celebrated musician visited Paranal to see the astronomical centre, home of the Very Large Telescope (VLT), and experience its dazzling skies first-hand.

To the delight of the staff, he gave a special concert for which he requested completely dark skies. He is pictured here during the starlit performance, with the majestic band of the Milky Way and the Magellanic clouds overhead, making for a uniquely atmospheric setting. He gave renditions of several Bach cello suites among other pieces, and even asked his audience if they had any special requests.

The next day, Yo-Yo Ma met with some members of staff, who shared their experiences of working in the extreme environment of the Atacama Desert to unveil the mysteries of the Universe. He was given gifts as mementoes of his visit, including an ESO cap, which he later wore during a performance in Santiago.

The artist was motivated to visit the site and perform there by his deep fascination with astronomy. He and his team have described the experience as a major highlight of the tour.