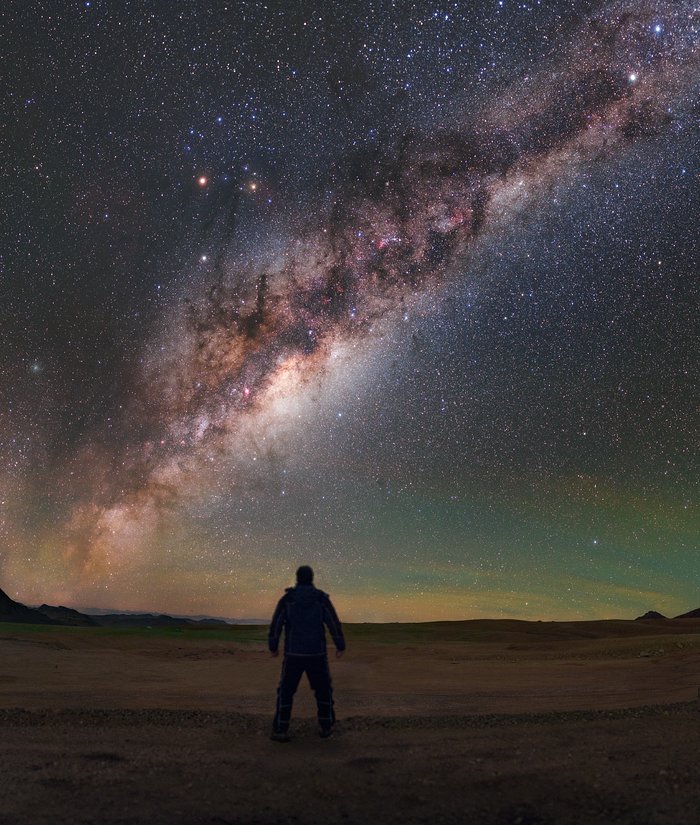 This week’s Picture of the Week showcases the bulging heart of the Milky Way as it hangs over the Chajnantor plateau. Located in the Atacama Desert of Chile, this plateau is one of the highest and driest places on Earth. This combination results in ideal conditions to observe millimetre and submillimetre radiation from space, which is usually strongly absorbed by Earth’s atmosphere. It is therefore no surprise that the Chajnantor plateau is home to the spectacularly productive Atacama Large Millimeter/submillimeter Array (ALMA), a state-of-the-art telescope that is studying light from some of the coldest objects in the Universe.

Above the intricate dust clouds and the frenzied glow of billions of stars, Mars, Saturn and the star Antares make a distinct triangle in the sky. The fuzzy green object to the left of the frame, nearly drowned out by the spectacular light of the Milky Way, is an interplanetary visitor called Comet 252P/LINEAR. This comet zoomed past Earth in April 2016 — although it was too faint for the unaided eye to see, its beauty is revealed in long-exposure images like this one.

However, as the intrepid stargazer standing front and centre in this image demonstrates, the plateau is also an excellent place for observing the cosmos with the naked eye. It provides views of the southern skies in breathtaking clarity, harking back to the days before artificial lights began to crowd the skies and drown out our view of the Universe.