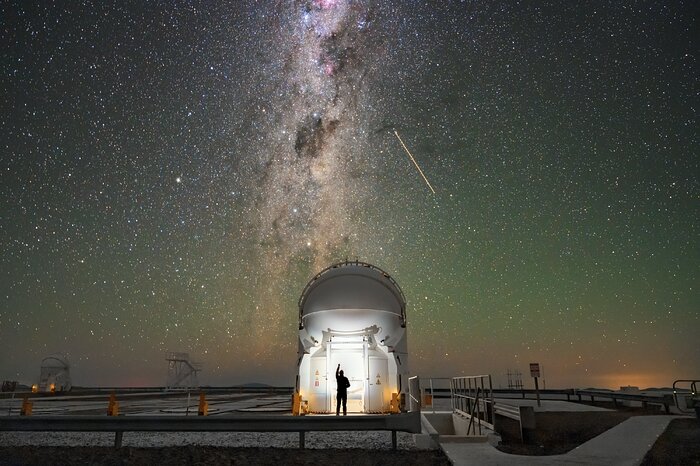 A person’s welcoming silhouette is outlined against one of the Auxiliary Telescopes (ATs) at ESO's Paranal Observatory in the Atacama Desert of Chile, as the coalsack nebula waves its majestic hello as a dark smudge in the middle of the night sky.

This is one of ESO’s Very Large Telescope’s four 1.8-metre Auxiliary Telescopes, which also includes four giant 8.2-metre cousins, the Unit Telescopes (UTs). Depending on the needs of each observing project, the ATs can be repositioned in up to 30 different observing locations along a system of tracks and act together as part of the VLT Interferometer. The interferometer combines the light the ATs or the UTs capture from celestial objects with a technique known as interferometry, allowing researchers to observe the cosmos in incredible detail.

As the Coalsack nebula is rich in dust, it absorbs and scatters most of the visible starlight behind it. However, these obscured stars can shine through dust when observed at infrared wavelengths, which can pass through dust almost unimpeded.