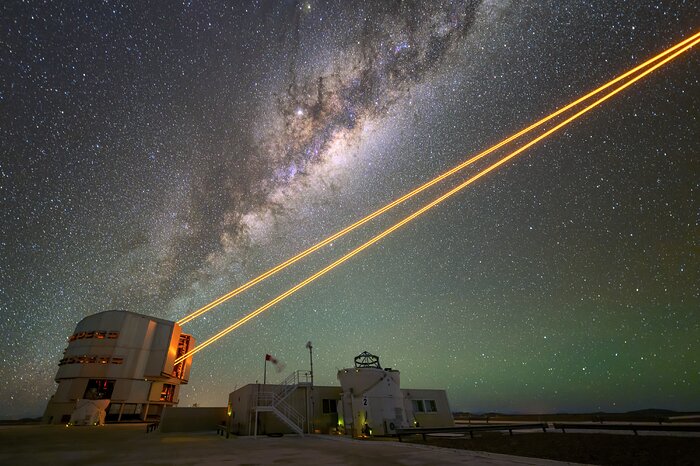 Using adaptive optics, telescopes are able to correct for the effects of atmospheric turbulence, which causes the “twinkling” and blurring of stars and other objects in the sky. To do this, a deformable mirror reshapes itself up to 1000 times per second based on the observed turbulence. Astronomers measure turbulence by monitoring a bright star in the field of view. If there isn’t a suitable star, they create artificial stars in the Earth’s upper atmosphere using lasers. The lasers in this image have a very specific orange-yellow colour (with a wavelength of 589 nm), exciting sodium atoms about 90 km above ground, causing them to shine like a star.

In the backdrop, almost appearing to follow the path of the laser beams, is the familiar band of the Milky Way stretching across the sky. Also visible is a faint green wash in the sky that results from a phenomenon known as airglow, which is light naturally emitted by atoms and molecules in the atmosphere. Airglow is only visible in areas where the sky is dark enough not to be overshadowed by light pollution.