Come and see the live Planetarium Show in December

This winter, the ESO Supernova Planetarium & Visitor Centre has a special addition to its programme: the show Enlightening Time Travel. Screening only 4 times during the month of December, the show takes you on a journey to the extremes of space, time, and energy, offering answers to questions such as: How did ancient cultures experience the impressive night sky? How did this impression change with the advent of the European Southern Observatory’s most advanced telescopes? Which stories were told back then, and which ones are today?

During the one-hour planetarium show, settle down to wonder at the quiet sense of magic of the Universe, as it was felt thousands of years ago by ancient cultures and religions and as it is revealed now by the astronomers and engineers of the European Southern Observatory (ESO).

This special planetarium show will be shown between 1 and 22 December 2019. To reserve your seat, follow this link.

Celestial phenomena have always fascinated humankind, whether it was the returning Sun that gave hope during the enduring cold winter, or the star of Bethlehem that blazed the trail for the three Magi. They encircled myths, influenced the development of many cultures and religions, and sparked scientific curiosity.

Enlightening Time Travel invites you to follow in our ancestor's footsteps and explore the magnificent sky, from their ancient tales, to recent discoveries made with ESO’s dedicated instruments and interpreted via advanced analysis techniques. Find out how astronomers and engineers extend their search far beyond the visible range and let them reveal to you a manifold Universe that no one could have imagined before.

Come on board our spaceship to visit the extremes of the Universe; and always remember to look back at our tiny blue dot — the Earth — an oasis in the depths of space.

The ESO Supernova Planetarium & Visitor Centre is a cutting-edge astronomy centre for the public and an educational facility, located at the site of the ESO Headquarters in Garching bei München. The centre hosts the largest tilted planetarium in Germany, Austria and Switzerland and an interactive exhibition, sharing the fascinating world of astronomy and ESO to inspire coming generations to appreciate and understand the Universe around us. All content is provided in English and German. Entrance to the exhibition is free, and requires no prior booking. For planetarium shows, guided tours and other activities, visitors need to book and pay for their tickets online. For more details visit: supernova.eso.org 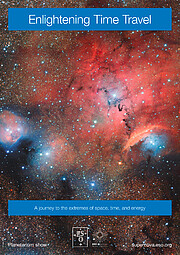