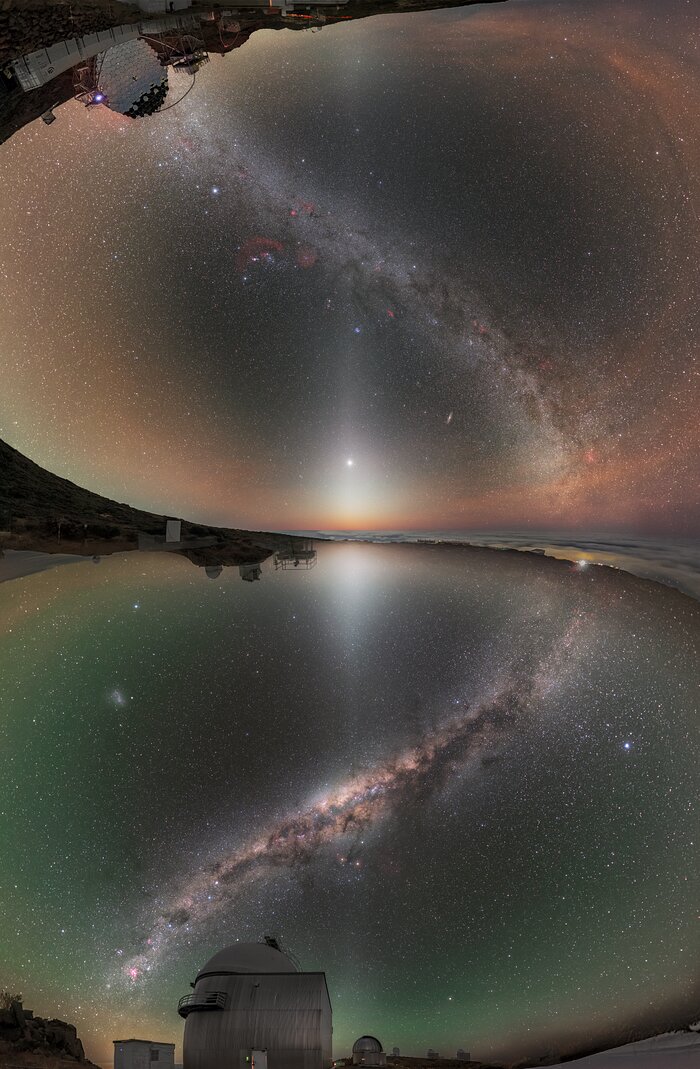 Looking at this photo might make you feel a little topsy-turvy! This Picture of the Week captures both the Northern and Southern Hemisphere at once — the whole night’s sky in one mind-bending image — something that would be impossible to see in real life.

To create this image, photographers Petr Horálek and Juan Carlos Casado took two pictures at observatories located at the same latitudes in the Northern and Southern Hemispheres. The top half is a photo taken at the Instituto de Astrofísica de Canarias’ Roque de los Muchachos Observatory in La Palma in the Canary Islands, 29 degrees north of the equator, whilst the bottom half was taken at ESO’s La Silla Observatory in Chile’s Atacama Desert, 29 degrees south of the equator. When digitally stitched together, they create a continuous sweeping view of the night’s sky.

One of the most noticeable features in this picture is the eerie white glow radiating out vertically from its centre. This is the zodiacal light, a phenomenon caused by dust that pervades our Solar System scattering sunlight, which is only visible in areas with extremely dark skies free from light pollution. Shining brightly in the beam of the Northern Hemisphere Zodiacal Light is the planet Venus.

The bottom image shows several of the telescopes at La Silla, including the ESO 1-metre Schmidt telescope in the foreground. The reflective mirror seen upside-down in the top image is part of the Cherenkov Telescope Array (CTA), a group of gamma-ray telescopes observing some of the most energetic phenomena in the universe. A second array will be installed in the southern hemisphere close to ESO’s Paranal Observatory, via an agreement between CTA Observatory and ESO.