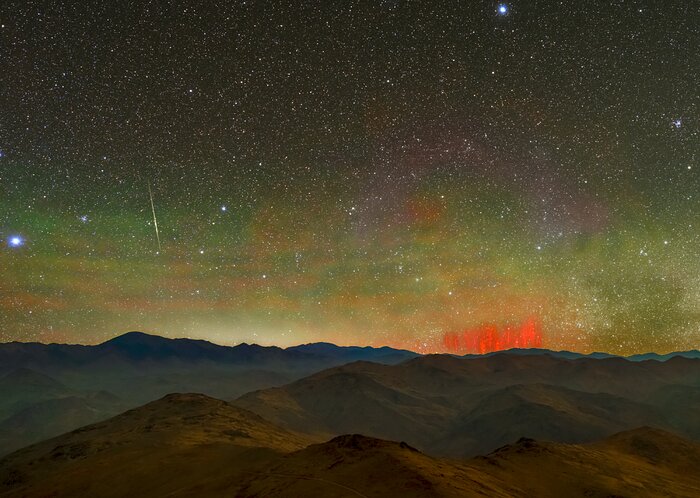 This picture of the week, taken from ESO’s La Silla Observatory in Chile, shows bright red streaks known as red sprites. These are an elusive form of lightning that occurs well-above storm clouds, discharging electricity high up in Earth’s atmosphere at an altitude of 50-90km. In addition to occurring much higher in the sky than regular lightning, they are cooler than the white lightning we usually see and appear much fainter. Red sprites are very difficult to catch: the first photographic evidence for them was only taken in 1989.

Seemingly painted across the background of the photograph is a green hue, known as airglow. During the day, sunlight knocks electrons away from nitrogen and oxygen in Earth’s atmosphere and, at night, these electrons recombine with the atoms and molecules, causing them to shine. Usually, airglow can only be seen in very dark skies where there is no light pollution.

This photograph was taken at the platform of ESO’s 3.6m telescope at La Silla in the middle of Chile’s Atacama desert. Because of its high altitude and lack of light pollution, La Silla is perfect for capturing these unusual phenomena.