The first results have been released from a major new dark matter survey of the southern skies using ESO’s VLT Survey Telescope (VST) at the Paranal Observatory in Chile. The VST KiDS survey will allow astronomers to make precise measurements of dark matter, the structure of galaxy halos, and the evolution of galaxies and clusters. The first KiDS results show how the characteristics of the observed galaxies are determined by the invisible vast clumps of dark matter surrounding them.

Around 85% of the matter in the Universe is dark [1], and of a type not understood by physicists. Although it doesn’t shine or absorb light, astronomers can detect this dark matter through its effect on stars and galaxies, specifically from its gravitational pull. A major project using ESO’s powerful survey telescopes is now showing more clearly than ever before the relationships between this mysterious dark matter and the shining galaxies that we can observe directly [2].

The project, known as the Kilo-Degree Survey (KiDS), uses imaging from the VLT Survey Telescope and its huge camera, OmegaCAM. Sited at ESO’s Paranal Observatory in Chile, this telescope is dedicated to surveying the night sky in visible light — and it is complemented by the infrared survey telescope VISTA. One of the major goals of the VST is to map out dark matter and to use these maps to understand the mysterious dark energy that is causing our Universe's expansion to accelerate.

The best way to work out where the dark matter lies is through gravitational lensing — the distortion of the Universe's fabric by gravity, which deflects the light coming from distant galaxies far beyond the dark matter. By studying this effect it is possible to map out the places where gravity is strongest, and hence where the matter, including dark matter, resides.

As part of the first cache of papers, the international KiDS team of researchers, led by Koen Kuijken at the Leiden Observatory in the Netherlands [3], has used this approach to analyse images of over two million galaxies, typically 5.5 billion light-years away [4]. They studied the distortion of light emitted from these galaxies, which bends as it passes massive clumps of dark matter during its journey to Earth.

The first results come from only 7% of the final survey area and concentrate on mapping the distribution of dark matter in groups of galaxies. Most galaxies live in groups — including our own Milky Way, which is part of the Local Group — and understanding how much dark matter they contain is a key test of the whole theory of how galaxies form in the cosmic web. From the gravitational lensing effect, these groups turn out to contain around 30 times more dark than visible matter.

"Interestingly, the brightest galaxy nearly always sits in the middle of the dark matter clump," says Massimo Viola (Leiden Observatory, the Netherlands) lead author of one of the first KiDS papers.

"This prediction of galaxy formation theory, in which galaxies continue to be sucked into groups and pile up in the centre, has never been demonstrated so clearly before by observations," adds Koen Kuijken.

The findings are just the start of a major programme to exploit the immense datasets coming from the survey telescopes and the data are now being made available to scientists worldwide through the ESO archive.

The KiDS survey will help to further expand our understanding of dark matter. Being able to explain dark matter and its effects would represent a major breakthrough in physics.

[1] Astronomers have found that the total mass/energy content of the Universe is split in the proportions 68% dark energy, 27% dark matter and 5% “normal” matter. So the 85% figure relates to the fraction of “matter” that is dark.

[2] Supercomputer calculations show how a Universe filled with dark matter will evolve: over time dark matter will clump into a huge cosmic web structure, and galaxies and stars form where gas is sucked into the densest concentrations of dark matter.

[3] The international KiDS team of researchers includes scientists from the Netherlands, the UK, Germany,  Italy and Canada.

[4] This work made use of the 3D map of galaxy groups, provided by the Galaxy And Mass Assembly project (GAMA), following extensive observations on the Anglo-Australian Telescope.

This research was presented in a series of papers submitted to several leading journals. A list can be found here. 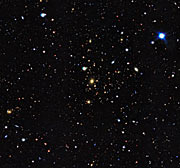 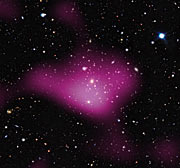 PR Image eso1528c
First results from the KiDS survey (dark matter)
Send us your comments!
Subscribe to receive news from ESO in your language
Accelerated by CDN77
Terms & Conditions