ESO’s Very Large Telescope (VLT) has achieved first light with a new adaptive optics mode called laser tomography — and has captured remarkably sharp test images of the planet Neptune, star clusters and other objects. The pioneering MUSE instrument in Narrow-Field Mode, working with the GALACSI adaptive optics module, can now use this new technique to correct for turbulence at different altitudes in the atmosphere. It is now possible to capture images from the ground at visible wavelengths that are sharper than those from the NASA/ESA Hubble Space Telescope. The combination of exquisite image sharpness and the spectroscopic capabilities of MUSE will enable astronomers to study the properties of astronomical objects in much greater detail than was possible before.

The MUSE (Multi Unit Spectroscopic Explorer) instrument on ESO’s Very Large Telescope (VLT) works with an adaptive optics unit called GALACSI. This makes use of the Laser Guide Star Facility, 4LGSF, a subsystem of the Adaptive Optics Facility (AOF). The AOF provides adaptive optics for instruments on the VLTs Unit Telescope 4 (UT4). MUSE was the first instrument to benefit from this new facility and it now has two adaptive optics modes — the Wide Field Mode and the Narrow Field Mode [1].

The MUSE Wide Field Mode coupled to GALACSI in ground-layer mode corrects for the effects of atmospheric turbulence up to one kilometre above the telescope over a comparatively wide field of view. But the new Narrow Field Mode using laser tomography corrects for almost all of the atmospheric turbulence above the telescope to create much sharper images, but over a smaller region of the sky [2].

With this new capability, the 8-metre UT4 reaches the theoretical limit of image sharpness and is no longer limited by atmospheric blur. This is extremely difficult to attain in the visible and gives images comparable in sharpness to those from the NASA/ESA Hubble Space Telescope. It will enable astronomers to study in unprecedented detail fascinating objects such as supermassive black holes at the centres of distant galaxies, jets from young stars, globular clusters, supernovae, planets and their satellites in the Solar System and much more.

Adaptive optics is a technique to compensate for the blurring effect of the Earth’s atmosphere, also known as astronomical seeing, which is a big problem faced by all ground-based telescopes. The same turbulence in the atmosphere that causes stars to twinkle to the naked eye results in blurred images of the Universe for large telescopes. Light from stars and galaxies becomes distorted as it passes through our atmosphere, and astronomers must use clever technology to improve image quality artificially.

To achieve this four brilliant lasers are fixed to UT4 that project columns of intense orange light 30 centimetres in diameter into the sky, stimulating sodium atoms high in the atmosphere and creating artificial Laser Guide Stars. Adaptive optics systems use the light from these “stars” to determine the turbulence in the atmosphere and calculate corrections one thousand times per second, commanding the thin, deformable secondary mirror of UT4 to constantly alter its shape, correcting for the distorted light.

MUSE is not the only instrument to benefit from the Adaptive Optics Facility. Another adaptive optics system, GRAAL, is already in use with the infrared camera HAWK-I. This will be followed in a few years by the powerful new instrument ERIS. Together these major developments in adaptive optics are enhancing the already powerful fleet of ESO telescopes, bringing the Universe into focus.

This new mode also constitutes a major step forward for the ESO’s Extremely Large Telescope, which will need Laser Tomography to reach its science goals. These results on UT4 with the AOF will help to bring ELT’s engineers and scientists closer to implementing similar adaptive optics technology on the 39-metre giant.

[2] Atmospheric turbulence varies with altitude; some layers cause more degradation to the light beam from stars than others. The complex adaptive optics technique of Laser Tomography aims to correct mainly the turbulence of these atmospheric layers. A set of pre-defined layers are selected for the MUSE/GALACSI Narrow Field Mode at 0 km (ground layer; always an important contributor), 3, 9 and 14 km altitude. The correction algorithm is then optimised for these layers to enable astronomers to reach an image quality almost as good as with a natural guide star and matching the theoretical limit of the telescope. 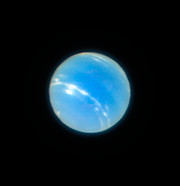 PR Image eso1824c
Neptune from the VLT and Hubble

Neptune from the VLT with MUSE Narrow Field Mode adaptive optics
Send us your comments!
Subscribe to receive news from ESO in your language
Accelerated by CDN77
Terms & Conditions