Cloud city in a galaxy far, far away... 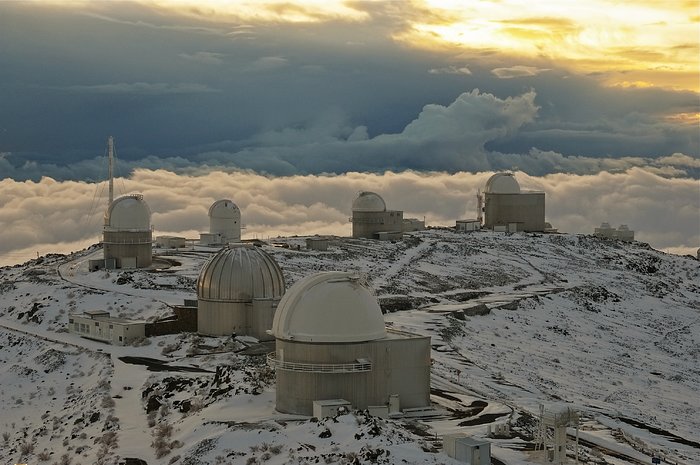 Resembling a cross between the Bespin Cloud City and the ice planet Hoth from Star Wars: The Empire Strikes Back, here we see ESO’s La Silla Observatory blanketed in snow as the Sun sets.

The characteristic domes of the La Silla telescopes are closed off to protect the instruments from the harsh environment and icy weather. Amongst the plethora of white, the MPG/ESO 2.2-metre telescope is particularly distinctive due to its silver dome. On a normal night, as darkness falls, the telescope domes will open and begin their nightly routine of observing the cosmos.

Despite being located in a very dry area of the world, La Silla does occasionally experience some precipitation in the form of snow and a spattering of rain, as seen in this chilly picture taken by ESO Photo Ambassador Malte Tewes. However, although it does get cold in the Atacama Desert, where La Silla is located it rarely drops below zero degrees Celsius… So how can there be snow?

The dry air of the region plays a large part in this phenomenon. In dry conditions, snowflakes form and as they drop a small amount of evaporation occurs. This process removes heat from the snowflake, keeping it cold enough to survive the descent into a region where the temperature is above freezing. In short, the lower the humidity in the atmosphere, the higher the temperature at which it can snow — and so we can find snow in the Atacama Desert.

This image is part of a wider panorama.