Comet McNaught, the Great Comet of 2007, has been delighting those who have seen it with the unaided eye as a spectacular display in the evening sky. Pushing ESO's New Technology Telescope to its limits, a team of European astronomers have obtained the first, and possibly unique, detailed observations of this object. Their images show spectacular jets of gas from the comet spiralling several thousands of kilometres into space, while the spectra reveal the presence of sodium in its atmosphere, something seen very rarely.

Comet C/2006 P1 (McNaught) has rightly earned the title of a 'Great Comet' - one so bright in the sky that such an occurrence could be expected just once in a generation.

The problem for astronomers was that the comet stayed very close to the Sun and so was only visible very low on the horizon, making it impossible for most professional telescopes to study it in detail. One telescope, however, was up to the challenge: ESO's New Technology Telescope (NTT), at La Silla.

"We had previously pointed the NTT very low to observe the planet Mercury, which is very close to the Sun and is therefore only visible low in the sky just after sunset. I realised that we could take advantage of the same low pointing limit to observe the comet while it was near the Sun", said ESO astronomer Colin Snodgrass [1].

From the 29th January onwards, the comet was thus observed with the NTT, revealing in detail the heart of the comet. This was no easy feat as even with the NTT it was only observable for half an hour after sunset. Luckily, the NTT has another major advantage: it is equipped with the versatile ESO Multi Mode Instrument (EMMI), which can provide both imaging and spectroscopic observations across the visible wavelength range. This meant that the maximum amount of scientific data could be taken during the limited time available for observations.

The unique images reveal three clear jets of gas, which are seen to spiral away from the nucleus as it rotates, like a Catherine Wheel firework.

"These jets are produced when sunlight heats ices on the surface of the comet, causing them to evaporate into space and create 'geyser' like jets of gas and small dust particles, which stretch over 13,000 km into space - greater than the diameter of the Earth - despite the fact that the nucleus of the comet is probably less than 25 km in diameter," explained Snodgrass.

By comparing images like this taken at different times, astronomers should be able to calculate how fast the nucleus rotates from the changing pattern of jets.

Other images also reveal that while the gas forms spiral jets, the large dust particles released from the comet follow a different pattern, as they are thrown off the comet's surface on the brightly lit side towards the Sun, producing a bright fan, which is then blown back by the pressure of sunlight itself.

As well as taking images, the astronomers were able to investigate which gases were present in the comet's atmosphere [2] using spectroscopy. The usual gaseous species have been detected, such as cyanide, carbon, and ammonia, whose analysis will help the astronomers to determine the activity level of the comet and its chemical type.

But already in the first high resolution spectrum obtained on 29 January, the astronomers noted something quite unusual.

"We detected two very bright lines - the brightest of the whole spectrum taken on this day as a matter of fact - close to 589 nm and quickly identified them as belonging to neutral sodium atoms," said Emmanuël Jehin (ESO). "Further measurements showed this sodium emission to be extending over more than 100,000 km in the tail direction and fading rapidly with time."

Such lines have only been detected in the greatest comets of the past century like C/Ikeya-Seki in 1965, C/West in 1976 and C/Hale-Bopp in 1997, for which a very narrow sodium tail was even photographed. This straight neutral tail appears in addition to the dust and ionised gas tails when the comet is close to the Sun.

"Its origin lies most probably in the dissociation of the cometary dust grains," said Jehin. "In very active comets, which are also usually the ones which pass closer to the Sun, the dust grains are vaporised under the intense heat and start releasing sodium atoms which then react to the solar radiation and emit light—at the very same yellow-orange wavelength of the lamps on our streets."

Sodium has also been observed around Mercury and the Moon forming a very tenuous atmosphere. But closer to us, at 90 km altitude in our atmosphere, there is the so-called 'sodium layer'. The origin of that layer is not well known but might be coming from the ablation of meteoroids that are burning (due to their high entry speed in the atmosphere) at the same altitude. As most shooting stars (or meteors) originate from comets (annual showers like the Eta Aquarids and Orionids originate from comet P/Halley, the Leonids come from comet P/Tempel-Tuttle, and the Perseids from comet P/Swift-Tuttle), the sodium in those dust particles might just be the same. As a kind of gift to the astronomers that layer is used by observatories like Paranal to produce with a laser an artificial star that allows for the correction of atmospheric turbulence! 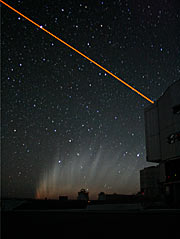 Afbeelding eso0707d
The comet and the laser