Subscribe to receive news from ESO in your language!
Search results for ‘releases with Facility used matching 'ESO 1.52-metre telescope'.’ 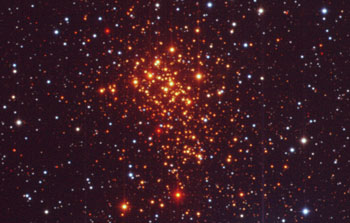 eso0510 — Science Release
Young and Exotic Stellar Zoo
22 March 2005: Super star clusters are groups of hundreds of thousands of very young stars packed into an unbelievably small volume. They represent the most extreme environments in which stars and planets can form. Until now, super star clusters were only known to exist very far away, mostly in pairs or groups of interacting galaxies. Now, however, a team of European astronomers [1] have used ESO's telescopes to uncover such a monster object within our own Galaxy, the Milky Way, almost, but not quite, in our own backyard! The newly found massive structure is hidden behind a large cloud of dust and gas and this is why it took so long to unveil its true nature. It is known as "Westerlund 1" and is a thousand times closer than any other super star cluster known so far. It is close enough that astronomers may now probe its structure in some detail. Westerlund 1 contains hundreds of very massive stars, some shining with a brilliance of almost one million suns and some two-thousand times larger than the Sun (as large as the orbit of Saturn)! Indeed, if the Sun were located at the heart of this remarkable cluster, our sky would be full of hundreds of stars as bright as the full Moon. Westerlund 1 is a most unique natural laboratory for the study of extreme stellar physics, helping astronomers to find out how the most massive stars in our Galaxy live and die. From their observations, the astronomers conclude that this extreme cluster most probably contains no less than 100,000 times the mass of the Sun, and all of its stars are located within a region less than 6 light-years across. Westerlund 1 thus appears to be the most massive compact young cluster yet identified in the Milky Way Galaxy.
Read more 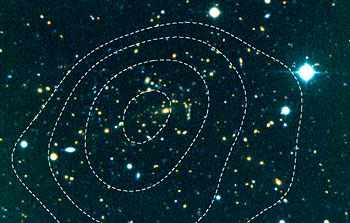 eso0419 — Science Release
Charting the Giants
3 June 2004: Astronomers unveil a few hundred clusters of galaxies by observing their emission in the X-Ray wavelengths. This study also provides new insights on the amount of dark matter in the Universe.
Read more 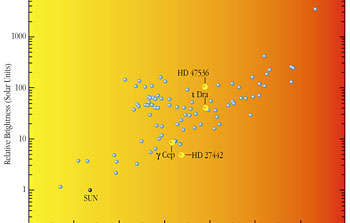 eso0305 — Science Release
Distant World in Peril Discovered from La Silla
22 January 2003: When, in a distant future, the Sun begins to expand and evolves into a "giant" star, the surface temperature on the Earth will rise dramatically and our home planet will eventually be incinerated by that central body. Fortunately for us, this dramatic event is several billion years away. However, that sad fate will befall another planet, just discovered in orbit about the giant star HD 47536, already within a few tens of millions of years. At a distance of nearly 400 light-years from us, it is the second-remotest planetary system discovered to date [1]. This is an interesting side-result of a major research project, now carried out by a European-Brazilian team of astronomers [2]. In the course of a three-year spectroscopic survey, they have observed about 80 giant stars in the southern sky with the advanced FEROS spectrograph on the 1.52-m telescope installed at the ESO La Silla Observatory (Chile). It is one of these stars that has just been found to host a giant planet. This is only the fourth such case known and with a diameter of about 33 million km (or 23.5 times that of our Sun), HD 47536 is by far the largest of those giant stars [1]. The distance of the planet from the star is still of the order of 300 million km (or twice the distance of the Earth from the Sun), a safe margin now, but this will not always be so. The orbital period is 712 days, i.e., somewhat less than two Earth years, and the planet's mass is 5 - 10 times that of Jupiter. The presence of exoplanets in orbit around giant stars, some of which will eventually perish into their central star (be "cannibalized"), provides a possible explanation of the anomalous abundance of certain chemical elements that is observed in the atmospheres of some stars. This interesting discovery bodes well for coming observations of exoplanetary systems with new, more powerful instruments, like HARPS to be installed next year at the ESO 3.6-m telescope on La Silla, and also the Very Large Telescope Interferometer (VLTI) now being commissioned at Paranal.
Read more 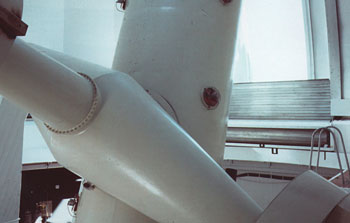 eso9905 — Organisation Release
FEROS Finds a Strange Star
2 February 1999: While a major effort is now spent on the Very Large Telescope and its advanced instruments at Paranal, ESO is also continuing to operate and upgrade the extensive research facilities at La Silla, its other observatory site. Within this programme, a new and powerful spectrograph, known as the Fibre-fed Extended Range Optical Spectrograph (FEROS), has recently been built by a consortium of European institutes. It was commissioned in late 1998 at the ESO 1.52-m telescope by a small team of astronomers and engineers and has already produced the first, interesting scientific results.
Read more 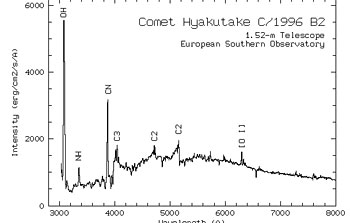 eso9620 — Photo Release
Spectrum of Comet Hyakutake (3000-8000 A)
13 March 1996: A complete, optical spectrum of Comet Hyakutake was obtained with the ESO 1.52-m telescope (La Silla Observatory) by Hilmar Duerbeck (ESO) on UT March 8.3, 1996. For this observation, the Boller & Chivens spectrograph with a new UV-sensitive CCD chip was used. The subsequent data reduction was performed by the observer and Stefano Benetti (ESO) at ESO's office in Santiago de Chile.
Read more 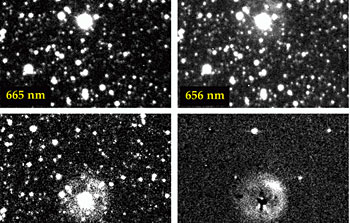 eso9619 — Science Release
Sakurai's Object: A Once-in-a-Llifetime Experience
7 March 1996: A bright 'new' star was discovered by Japanese amateur astronomer Yukio Sakurai in late February 1996. It is located in the star-rich, southern constellation of Sagittarius (The Archer) and qualifies to join an extremely select class of stars. In fact, we know only one additional object of this type and the remains of two - possibly three - others. Compared to the 6000 stars in the sky seen with the naked eye, the several millions so far catalogued, and the billions of stars photographed, it is a very special class indeed. Nevertheless, Sakurai's star holds unique information about a dramatic evolutionary state, which all stars must to pass through whose masses are more than a few times that of the Sun, but still too small to produce a supernova explosion. This happens just before they end their active life and cool down into visual oblivion.
Read more 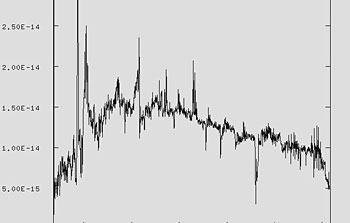 eso9611 — Photo Release
First Spectrum of Comet C/1996 B2 (Hyakutake)
11 February 1996: This diagramme shows the first spectrum obtained of comet C/1996 B2 (Hyakutake), which is expected to pass near the Earth in late March 1996. It was taken by Tomaz Zwitter, visiting astronomer at the ESO La Silla Observatory from the University of Ljubljana, Slovenia. It has been flux- [(erg/s/cm2/A) within 2x14 arcsecond slit centered on comet] and wavelength- [Angstrom] calibrated.
Read more 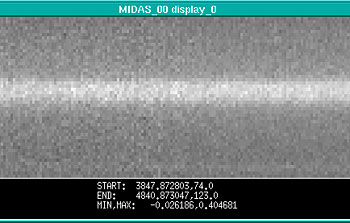 eso9524 — Science Release
A Spectrum of Comet Hale-Bopp
11 September 1995: Comet Hale-Bopp is known to possess a bright coma, despite its large distance from the Sun, almost 1,000 million km. Observations have shown that this coma consists of dust particles of different sizes that have been ejected from the comet's nucleus.
Read more 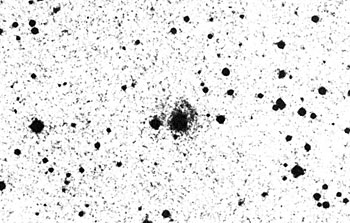 eso8709 — Science Release
Hunting the Black Hole
16 June 1987: Of all exotic objects predicted by current theories, none are as elusive as the Black Holes. Despite great efforts, their existence has never been unambiguously proven by astronomical observations.
Read more 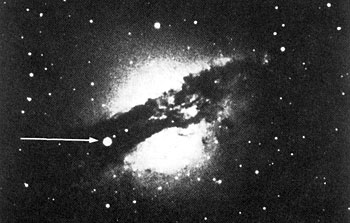 eso8608 — Science Release
Big Radio Galaxy is Nearer than Previously Thought
13 May 1986: Detailed observations of a bright supernova in the peculiar galaxy NGC 5128 = Centaurus A, have led astronomers at the European Southern Observatory to believe that this galaxy is much closer to us than previously thought. It is the nearest, strongly radio-emitting galaxy and is as such an object of crucial importance in modern astrophysical research. The revised distance is 7 - 10 million light years or only 3 - 4 times farther away than the Andromeda Nebula. Cen A may therefore even be an outlying member of the Local Group. The total radio emission energy corresponds to the conversion to pure energy (annihilation) of a mass equal to 10.000 suns.
Read more
Showing 1 to 11 of 11
Usage of ESO Images, Videos, Web texts and Music