Subscribe to receive news from ESO in your language!
Search results for ‘releases with Facility used matching 'Coudé Auxiliary Telescope'.’

eso9938 — Science Release
Extrasolar Giant Planet in Earth-like Orbit
29 July 1999: A new extrasolar planet has been found at the ESO La Silla Observatory as a companion to iota Horologii (iota Hor). This 5.4-mag solar-type star is located at a distance of 56 light-years and is just visible to the unaided eye in the southern constellation Horologium (The Pendulum Clock).
Read more 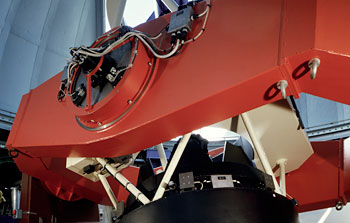 eso8710 — Science Release
Is the Universe Younger than Previously Thought?
3 July 1987: The first observations of a long-lived radioactive isotope outside the Solar System indicate that the Universe may be younger than previously thought. Using one of the world's most powerful spectrometers, located at the ESO La Silla observatory in Chile, Professor Harvey R. Butcher of the University of Groningen, The Netherlands, has detected for the first time the radioactive element Thorium-232 in stars. A comparison of its abundance in old and young stars failed to show the expected differences. This means that the total age of Thorium-232 in these stars must be smaller than about 10 Gyr [1], instead of the previously estimated 16 - 18 Gyr.
Read more
Showing 1 to 2 of 2
Usage of ESO Images, Videos, Web texts and Music