Subscribe to receive news from ESO in your language!
Search results for ‘releases with Facility used matching 'Auxiliary Telescopes'.’ 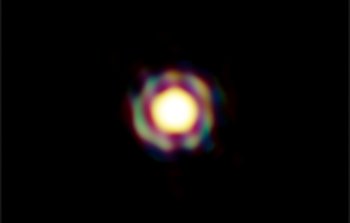 eso0906 — Organisation Release
Hundred metre virtual telescope captures unique detailed colour image
18 February 2009: A team of French astronomers has captured one of the sharpest colour images ever made. They observed the star T Leporis, which appears, on the sky, as small as a two-storey house on the Moon [1]. The image was taken with ESO's Very Large Telescope Interferometer (VLTI), emulating a virtual telescope about 100 metres across and reveals a spherical molecular shell around an aged star.
Read more
Showing 1 to 1 of 1
Usage of ESO Images, Videos, Web texts and Music