Clues to the Mysterious Origin of Cosmic Rays

Very detailed new observations with ESO’s Very Large Telescope (VLT) of the remains of a thousand-year-old supernova have revealed clues to the origins of cosmic rays. For the first time the observations suggest the presence of fast-moving particles in the supernova remnant that could be the precursors of such cosmic rays. The results are appearing in the 14 February 2013 issue of the journal Science.

In the year 1006 a new star was seen in the southern skies and widely recorded around the world. It was many times brighter than the planet Venus and may even have rivaled the brightness of the Moon. It was so bright at maximum that it cast shadows and it was visible during the day. More recently astronomers have identified the site of this supernova and named it SN 1006. They have also found a glowing and expanding ring of material in the southern constellation of Lupus (The Wolf) that constitutes the remains of the vast explosion.

It has long been suspected that such supernova remnants may also be where some cosmic rays — very high energy particles originating outside the Solar System and travelling at close to the speed of light — are formed. But until now the details of how this might happen have been a long-standing mystery.

A team of astronomers led by Sladjana Nikolić (Max Planck Institute for Astronomy, Heidelberg, Germany [1]) has now used the VIMOS instrument on the VLT to look at the one-thousand-year-old SN 1006 remnant in more detail than ever before. They wanted to study what is happening where high-speed material ejected by the supernova is ploughing into the stationary interstellar matter — the shock front. This expanding high-velocity shock front is similar to the sonic boom produced by an aircraft going supersonic and is a natural candidate for a cosmic particle accelerator.

For the first time the team has not just obtained information about the shock material at one point, but also built up a map of the properties of the gas, and how these properties change across the shock front. This has provided vital clues to the mystery.

The results were a surprise — they suggest that there were many very rapidly moving protons in the gas in the shock region [2]. While these are not the sought-for high-energy cosmic rays themselves, they could be the necessary “seed particles”, which then go on to interact with the shock front material to reach the extremely high energies required and fly off into space as cosmic rays.

Nikolić explains: “This is the first time we were able to take a detailed look at what is happening in and around a supernova shock front. We found evidence that there is a region that is being heated in just the way one would expect if there were protons carrying away energy from directly behind the shock front.”

The study was the first to use an integral field spectrograph [3] to probe the properties of the shock fronts of supernova remnants in such detail. The team now is keen to apply this method to other remnants.

Co-author Glenn van de Ven of the Max Planck Institute for Astronomy, concludes: “This kind of novel observational approach could well be the key to solving the puzzle of how cosmic rays are produced in supernova remnants.”

[1] The new evidence emerged during analysis of the data by Sladjana Nikolić (Max Planck Institute for Astronomy) as part of work towards her doctoral degree at the University of Heidelberg.

[2] These protons are called suprathermal as they are moving much quicker than expected simply from the temperature of the material.

[3] This is achieved using a feature of VIMOS called an integral field unit, where the light recorded in each pixel is separately spread out into its component colours and each of these spectra recorded. The spectra can then be subsequently analysed individually and maps of the velocities and chemical properties of each part of the object created.

This research was presented in a paper “An Integral View of Fast Shocks around Supernova 1006” to appear in the journal Science on 14 February 2013. 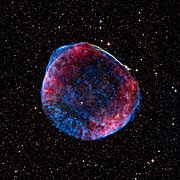 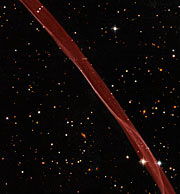 PR Image eso1308c
Part of the supernova remnant SN 1006 seen with the NASA/ESA Hubble Space Telescope
Send us your comments!
Subscribe to receive news from ESO in your language
Accelerated by CDN77
Terms & Conditions