About 35 million light-years from Earth, in the constellation of Eridanus (The River), lies the spiral galaxy NGC 1637. Back in 1999 the serene appearance of this galaxy was shattered by the appearance of a very bright supernova. Astronomers studying the aftermath of this explosion with ESO’s Very Large Telescope at the Paranal Observatory in Chile have provided us with a stunning view of this relatively nearby galaxy.

Supernovae are amongst the most violent events in nature. They mark the dazzling deaths of stars and can outshine the combined light of the billions of stars in their host galaxies.

In 1999 the Lick Observatory in California reported the discovery of a new supernova in the spiral galaxy NGC 1637. It was spotted using a telescope that had been specially built to search for these rare, but important cosmic objects [1]. Follow-up observations were requested so that the discovery could be confirmed and studied further. This supernova was widely observed and was given the name SN 1999em. After its spectacular explosion in 1999, the supernova’s brightness has been tracked carefully by scientists, showing its relatively gentle fading through the years.

The star that became SN 1999em was very massive — more than eight times the mass of the Sun — before its death. At the end of its life its core collapsed, which then created a cataclysmic explosion [2].

When they were making follow up observations of SN 1999em astronomers took many pictures of this object with the VLT, which were combined to provide us with this very clear image of its host galaxy, NGC 1637. The spiral structure shows up in this image as a very distinct pattern of bluish trails of young stars, glowing gas clouds and obscuring dust lanes.

Although at first glance NGC 1637 appears to be a fairly symmetrical object it has some interesting features. It is what astronomers classify as a lopsided spiral galaxy: the relatively loosely wound spiral arm at the top left of the nucleus stretches around it much further than the more compact and shorter arm at the bottom right, which appears dramatically slashed midway through its course.

Elsewhere in the image the view is scattered with much closer stars and more distant galaxies that happen to lie in the same direction.

[1] The supernova was discovered by the Katzman Automatic Imaging Telescope, at Lick Observatory on Mount Hamilton, California.

[2] SN 1999em is a core-collapse supernova classified more precisely as a Type IIp. The “p” stands for plateau, meaning supernovae of this type remain bright (on a plateau) for a relatively long period of time after maximum brightness. 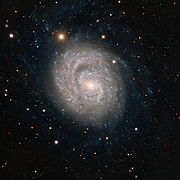 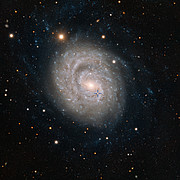 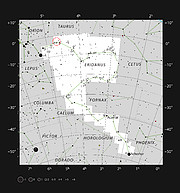 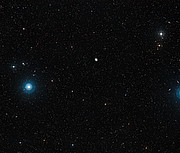 PR Video eso1315b
A close look at the spiral galaxy NGC 1637
Send us your comments!
Subscribe to receive news from ESO in your language
Accelerated by CDN77
Terms & Conditions