The VLT Survey Telescope (VST) at ESO’s Paranal Observatory in Chile has captured a beautifully detailed image of the galaxy Messier 33. This nearby spiral, the second closest large galaxy to our own galaxy, the Milky Way, is packed with bright star clusters, and clouds of gas and dust. The new picture is amongst the most detailed wide-field views of this object ever taken and shows the many glowing red gas clouds in the spiral arms with particular clarity.

Messier 33, otherwise known as NGC 598, is located about three million light-years away in the small northern constellation of Triangulum (The Triangle). Often known as the Triangulum Galaxy it was observed by the French comet hunter Charles Messier in August 1764, who listed it as number 33 in his famous list of prominent nebulae and star clusters. However, he was not the first to record the spiral galaxy; it was probably first documented by the Sicilian astronomer Giovanni Battista Hodierna around 100 years earlier.

Although the Triangulum Galaxy lies in the northern sky, it is just visible from the southern vantage point of ESO’s Paranal Observatory in Chile. However, it does not rise very high in the sky. This image was taken by the VLT Survey Telescope (VST), a state-of-the-art 2.6-metre survey telescope with a field of view that is twice as broad as the full Moon. This picture was created from many individual exposures, including some taken through a filter passing just the light from glowing hydrogen, which make the red gas clouds in the galaxies spiral arms especially prominent.

Among the many star formation regions in Messier 33’s spiral arms, the giant nebula NGC 604 stands out. With a diameter of nearly 1500 light-years, this is one of the largest nearby emission nebulae known. It stretches over an area 40 times the size of the visible portion of the much more famous — and much closer — Orion Nebula.

The Triangulum Galaxy is the third-largest member of the Local Group of galaxies, which includes the Milky Way, the Andromeda Galaxy, and about 50 other smaller galaxies. On an extremely clear, dark night, this galaxy is just visible with the unaided eye, and is considered to be the most distant celestial object visible without any optical help. Viewing conditions for the very patient are only set to improve in the long-term: the galaxy is approaching our own at a speed of about 100 000 kilometres per hour.

A closer look at this beautiful new picture not only allows a very detailed inspection of the star-forming spiral arms of the galaxy, but also reveals the very rich scenery of the more distant galaxies scattered behind the myriad stars and glowing clouds of NGC 598. 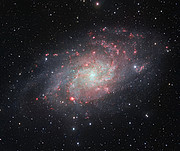 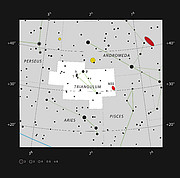 PR Image eso1424b
Messier 33 in the northern constellation of Triangulum 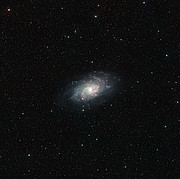 PR Video eso1424a
Zooming in on the Triangulum Galaxy

PR Video eso1424b
A close-up look at the Triangulum Galaxy
Send us your comments!
Subscribe to receive news from ESO in your language
Accelerated by CDN77
Terms & Conditions