This dazzling region of newly-forming stars in the Large Magellanic Cloud (LMC) was captured by the Multi Unit Spectroscopic Explorer instrument (MUSE) on ESO’s Very Large Telescope. The relatively small amount of dust in the LMC and MUSE’s acute vision allowed intricate details of the region to be picked out in visible light.

This region of the Large Magellanic Cloud (LMC) glows in striking colours in this image captured by the Multi Unit Spectroscopic Explorer (MUSE) instrument on ESO’s Very Large Telescope (VLT). The region, known as LHA 120-N 180B — N180 B for short — is a type of nebula known as an H II region (pronounced “H two”), and is a fertile source of new stars.

The LMC is a satellite galaxy of the Milky Way, visible mainly from the Southern Hemisphere. At only around 160 000 light-years away from the Earth, it is practically on our doorstep. As well as being close to home, the LMC’s single spiral arm appears nearly face-on, allowing us to inspect regions such as N180 B with ease.

H II regions are interstellar clouds of ionised hydrogen — the bare nuclei of hydrogen atoms. These regions are stellar nurseries — and the newly formed massive stars are responsible for the ionisation of the surrounding gas, which makes for a spectacular sight. N180 B’s distinctive shape is made up of a gargantuan bubble of ionised hydrogen surrounded by four smaller bubbles.

Deep within this glowing cloud, MUSE has spotted a jet emitted by a fledgling star — a massive young stellar object with a mass 12 times greater than our Sun. The jet — named Herbig–Haro 1177, or HH 1177 for short — is shown in detail in this accompanying image. This is the first time such a jet has been observed in visible light outside the Milky Way, as they are usually obscured by their dusty surroundings. However, the relatively dust-free environment of the LMC allows HH 1177 to be observed at visible wavelengths. At nearly 33 light-years in length, it is one of the longest such jets ever observed.

HH 1177 tells us about the early lives of stars. The beam is highly collimated; it barely spreads out as it travels. Jets like this are associated with the accretion discs of their star, and can shed light on how fledgling stars gather matter. Astronomers have found that both high- and low-mass stars launch collimated jets like HH 1177 via similar mechanisms — hinting that massive stars can form in the same way as their low-mass counterparts.

MUSE has recently been vastly improved by the addition of the Adaptive Optics Facility , the Wide Field Mode of which saw first light in 2017. Adaptive optics is the process by which ESO’s telescopes compensate for the blurring effects of the atmosphere — turning twinkling stars into sharp, high-resolution images. Since obtaining these data, the addition of the Narrow Field Mode, has given MUSE vision nearly as sharp as that of the NASA/ESA Hubble Space Telescope — giving it the potential to explore the Universe in greater detail than ever before.

This research was presented in a paper entitled “An optical parsec-scale jet from a massive young star in the Large Magellanic Cloud” which appeared in the journal Nature.

ESO is the foremost intergovernmental astronomy organisation in Europe and the world’s most productive ground-based astronomical observatory by far. It has 16 Member States: Austria, Belgium, the Czech Republic, Denmark, France, Finland, Germany, Ireland, Italy, the Netherlands, Poland, Portugal, Spain, Sweden, Switzerland and the United Kingdom, along with the host state of Chile and with Australia as a Strategic Partner. ESO carries out an ambitious programme focused on the design, construction and operation of powerful ground-based observing facilities enabling astronomers to make important scientific discoveries. ESO also plays a leading role in promoting and organising cooperation in astronomical research. ESO operates three unique world-class observing sites in Chile: La Silla, Paranal and Chajnantor. At Paranal, ESO operates the Very Large Telescope and its world-leading Very Large Telescope Interferometer as well as two survey telescopes, VISTA working in the infrared and the visible-light VLT Survey Telescope. ESO is also a major partner in two facilities on Chajnantor, APEX and ALMA, the largest astronomical project in existence. And on Cerro Armazones, close to Paranal, ESO is building the 39-metre Extremely Large Telescope, the ELT, which will become “the world’s biggest eye on the sky” 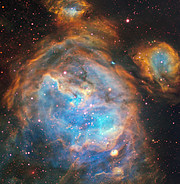 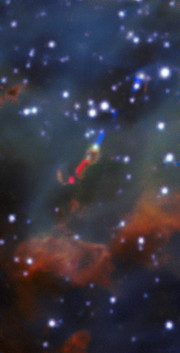 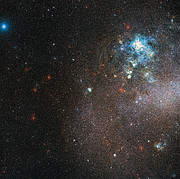 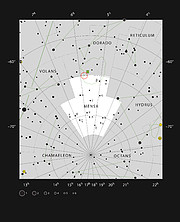 PR Video eso1903c
Panning across N180
Send us your comments!
Subscribe to receive news from ESO in your language
Accelerated by CDN77
Terms & Conditions