How Small are Small Stars Really?

At a distance of only 4.2 light-years, Proxima Centauri is the nearest star to the Sun currently known [2]. It is visible as an 11-magnitude object in the southern constellation of Centaurus and is the faintest member of a triple system, together with Alpha Centauri, the brightest (double) star in this constellation. Proxima Centauri is a very-low-mass star, in fact barely massive enough to burn hydrogen to helium in its interior. It is about seven times smaller than the Sun, and the surface temperature is "only" about 3000 degrees, about half of that of our own star. Consequently, it is also much fainter - the intrinsic brightness is only 1/150th of that of our Sun. Low-mass stars are very interesting objects , also because the physical conditions in their interiors have much in common with those of giant planets, like Jupiter in our solar system. A determination of the sizes of the smallest stars has been impossible until now because of their general faintness and lack of adequate instrumentation. However, astronomers have long been keen to move forward in this direction, since such measurements would provide indirect, crucial information about the behaviour of matter under extreme conditions. When the first observations with the VLT Interferometer (VLTI), combining the light from two of the 8.2-m VLT Unit Telescopes (ANTU and MELIPAL), were made one year ago, interferometric measurements were also obtained of Proxima Centauri . They formed part of the VLTI commissioning and the data were soon released to the ESO community, cf. the special website. Now, an international team of astronomers from Switzerland, France and ESO/Chile has successfully analysed these observations by means of newly developed, advanced software. For the first time ever, they obtained a highly accurate measurement of the size of such a small star. Three other small stars were also measured and the results are in excellent agreement with stellar theory, indicating that our present understanding of the structure and composition of very small stars is reasonably correct . More VLTI observations are soon to follow, eventually also of even smaller objects, like Brown Dwarfs.

From its spectrum, Proxima Centauri is classified as a "late M-dwarf star". Such stars are among the smallest and faintest, but also the most numerous in our Milky Way galaxy. ESO Press Photo eso0232 displays their particular location relative to other stars in a famous astronomical presentation of basic stellar parameters, known as the "Hertzsprung-Russell (HR) diagram" [3]. Here, stellar temperatures are plotted against brightness to yield a typical distribution that also represents the diverse stages of stellar evolution and ages.

M-dwarfs like Proxima Centauri are located in the cool and faint corner, at the lower right of this diagram. They define the bottom of the diagonal band referred to as the "main sequence" that is occupied by hydrogen-burning stars.

With a mass of only 15% of that of the Sun, Proxima Centauri is in the extreme low-mass end of the M-stars. In fact, if it had only half of its present mass, it would be too light for hydrogen fusion to ignite in its interior. It would then have been a "Brown-Dwarf" rather than a real star.

In the border zone between real stars, brown dwarfs and planets

For a normal star like the Sun whose matter behaves like a perfect gas, the stellar size is proportional to the mass. However, for low-mass stars like Proxima Centauri, quantum effects become important and the stellar matter becomes "degenerate", resisting compression much more than does a perfect gas. For objects with half the mass of Proxima Centauri or lighter, the matter is fully degenerate and their size does not depend on the mass.

In the case of Proxima Centauri, both the mass and the diameter are about 1/7 of those of the Sun. Contrarily, while it is 150 times more massive than Jupiter, it is only about 1.5 times larger than that planet.

Its location in the border zone between stars, brown dwarfs, and planets, makes Proxima Centauri a highly interesting object. A direct measurement of its size, until now impossible because of instrumental limitations, would represent a significant contribution to the study of the physics in this critical transition region.

This kind of measurement has now become possible, thanks to the VLT Interferometer, the VINCI instrument and new software for the complicated data analysis.

Observations were made of Proxima Centauri and three other small stars, soon after the light beams from ANTU and MELIPAL, two of the 8.2-m VLT telescopes, were first brought together in the VLT Interferometric Laboratory at the top of the Paranal mountain.

The VLTI, working with the two large VLT telescopes separated by 102.4 metres (when the moveable 1.8-m telescopes become operational, the maximum baseline will be 202 metres), provides the image sharpness needed to resolve such small stellar disks, and these telescopes are sufficiently large to observe fainter objects than what can normally be studied interferometrically.

Didier Queloz of the Geneva Observatory is content: "The measured sizes agree well with theoretical predictions, based on numerical models of planets and low-mass stars. The same holds for the sizes of a number of more massive stars that were measured at the same time. This gives us new confidence in the models of these extreme objects."

The use of wavelets

These new results did not come easily, though. The early VLTI data need very extensive processing before they can be astrophysically interpreted. One specific problem is that the two large telescopes here used (without which it would not have been possible to observe such a faint star) have not yet been equipped with "adaptive optics" to eliminate the effects of the turbulence in the Earth's atmosphere [4]. This strongly affects the interferometric measurements by adding "noise".

This particular difficulty had to be solved before the present observational data could be used, cf. ESO Press Photo eso0232 . "We overcame the problem by means of a novel technique based on so-called 'wavelet analysis' and specially developed for the present purpose", explains Damien Ségransan of the Geneva Observatory, "it is a mathematical device we took over from fluid mechanics - another demonstration of how we astronomers keep our eyes open for useful developments in other fields!".

This new scientific result, one of the first obtained with the VLT Interferometer, is a fine achievement of this new facility, especially when considering that it was obtained already during tests with the VINCI instrument that was designed to verify the functionality of the VLTI. With the coming installation of more performing and specialized instruments like the Mid-Infrared interferometric instrument for the VLTI (MIDI) and near-infrared/red VLTI focal instrument (AMBER) , the possibility to use also the four 1.8-m Auxiliary Telescopes, as well as the introduction of Adaptive Optics systems for the VLT Unit Telescopes, the astronomers now hope to move quickly forward towards the direct detection of short-period extra-solar planets with the VLTI.

[1]: This press release is issued in coordination between ESO and the Geneva University in Switzerland.

[2]: Proxima Centauri , the nearest known star to the solar system, is a member of a triple stellar system that includes the bright double star Alpha Centauri . Proxima is the nearest of the three. It was discovered in 1894 by a Scottish astronomer, Robert Thorburn Ayton Innes (1861 - 1915), during a stay at the Cape Observatory (South Africa), due to its very fast motion on the sky, about 3.9 arcsec/year. It is also designated GJ 551 , the 551st entry in the "Catalogue of Nearby Stars", published in 1969 by two German astronomers, Wilhelm G liese (1915-93) and Helmut J ahreis . The visual magnitude is 11, or 100 times fainter than what can be perceived with the unaided eye on a dark sky; the parallax measured by the ESA Hipparcos astrometric satellite is 772.33 ± 2.42 milliarcsec, corresponding to a distance of 4.22 light-years.

[3]: The "Hertzsprung-Russell" diagram is named after the Danish astronomer Einar Hertzsprung (1873-1967) and the American astronomer Henry Norris Russell (1877 - 1957). At the beginning of the 20th century they independently noticed that red stars come in very different sizes, pioneering subsequent studies of stellar parameters (e.g., temperature, size and mass). In its basic version, this diagram plots stellar temperature (or colour) against brightness (or magnitude) and is therefore also referred to as the "colour-magnitude diagram". The position of a particular star in the diagram also provides information about its evolutionary stage (and age).

[4]: The first Adaptive Optics instruments for the VLT Interferometer will be installed in 2003. 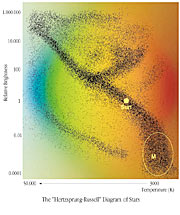 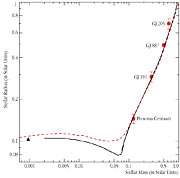 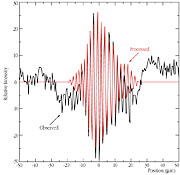