The President and the Galaxy

On December 9-10, 2004, the ESO Paranal Observatory was honoured with an overnight visit by His Excellency the President of the Republic of Chile, Ricardo Lagos and his wife, Mrs. Luisa Duran de Lagos. The high guests were welcomed by the ESO Director General, Dr. Catherine Cesarsky, ESO's representative in Chile, Mr. Daniel Hofstadt, and Prof. Maria Teresa Ruiz, Head of the Astronomy Department at the Universidad de Chile, as well as numerous ESO staff members working at the VLT site. The visit was characterised as private, and the President spent a considerable time in pleasant company with the Paranal staff, talking with and getting explanations from everybody.

The distinguished visitors were shown the various high-tech installations at the observatory, including the Interferometric Tunnel with the VLTI delay lines and the first Auxiliary Telescope. Explanations were given by ESO astronomers and engineers and the President, a keen amateur astronomer, gained a good impression of the wide range of exciting research programmes that are carried out with the VLT. President Lagos showed a deep interest and impressed everyone present with many, highly relevant questions.

Having enjoyed the spectacular sunset over the Pacific Ocean from the Residence terrace, the President met informally with the Paranal employees who had gathered for this unique occasion. Later, President Lagos visited the VLT Control Room from where the four 8.2-m Unit Telescopes and the VLT Interferometer (VLTI) are operated. Here, the President took part in an observing sequence of the spiral galaxy NGC 1097 (see ESO Press Photo eso0438) from the console of the MELIPAL telescope.

After one more visit to the telescope platform at the top of Paranal, the President and his wife left the Observatory in the morning of December 10, 2004, flying back to Santiago.

VLT obtains a splendid photo of a unique galaxy, NGC 1097

A unique and very beautiful image was obtained with the VIMOS instrument with President Lagos at the control desk.

Located at a distance of about 45 million light-years in the southern constellation Fornax (the Furnace), NGC 1097 is a relatively bright, barred spiral galaxy of type SBb, seen face-on. At magnitude 9.5, and thus just 25 times fainter than the faintest object that can be seen with the unaided eye, it appears in small telescopes as a bright, circular disc.

The image  taken on the night of December 9 to 10, 2004 with the VIsible Multi-Object Spectrograph (VIMOS), a four-channel multiobject spectrograph and imager attached to the 8.2-m VLT Melipal telescope, shows that the real structure is much more complicated. NGC 1097 is indeed a most interesting object in many respects.

As this striking image reveals, NGC 1097 presents a centre that consists of a broken ring of bright knots surrounding the galaxy's nucleus. The sizes of these knots - presumably gigantic bubbles of hydrogen atoms having lost one electron (HII regions) through the intense radiation from luminous massive stars - range from roughly 750 to 2000 light-years. The presence of these knots suggests that an energetic burst of star formation has recently occurred.

NGC 1097 is also known as an example of the so-called LINER (Low-Ionization Nuclear Emission Region Galaxies) class. Objects of this type are believed to be low-luminosity examples of Active Galactic Nuclei (AGN), whose emission is thought to arise from matter (gas and stars) falling into oblivion in a central black hole.

There is indeed much evidence that a supermassive black hole is located at the very centre of NGC 1097, with a mass of several tens of million times the mass of the Sun. This is at least ten times more massive than the central black hole in our own Milky Way.

However, NGC 1097 possesses a comparatively faint nucleus only, and the black hole in its centre must be on a very strict "diet": only a small amount of gas and stars is apparently being swallowed by the black hole at any given moment.

As can be clearly seen, NGC 1097 also has a small galaxy companion; it is designated NGC 1097A and is located about 42,000 light-years away from the centre of NGC 1097. This peculiar elliptical galaxy is 25 times fainter than its big brother and has a "box-like" shape, not unlike NGC 6771, the smallest of the three galaxies that make up the famous Devil's Mask.

There is evidence that NGC 1097 and NGC 1097A have been interacting in the recent past.

Another piece of evidence for this galaxy's tumultuous past is the presence of four jets - not visible on this image - discovered in the 1970's on photographic plates. These jets are now believed to be the captured remains of a disrupted dwarf galaxy that passed through the inner part of the disc of NGC 1097.

Moreover, another interesting feature of this active galaxy is the fact that no less than two supernovae were detected inside it within a time span of only four years. SN 1999eu was discovered by Japanese amateur Masakatsu Aoki (Toyama, Japan) on November 5, 1999. This 17th-magnitude supernova was a peculiar Type II supernova, the end result of the core collapse of a very massive star. And in the night of January 5 to 6, 2003, Reverend Robert Evans (Australia) discovered another Type II supernova of 15th magnitude.

Also visible in this very nice image which was taken during very good sky conditions - the seeing was well below 1 arcsec - are a multitude of background galaxies of different colours and shapes. Given the fact that the total exposure time for this three-colour image was just 11 min, it is a remarkable feat, demonstrating once again the very high efficiency of the VLT. 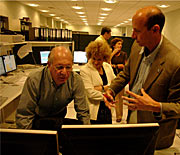 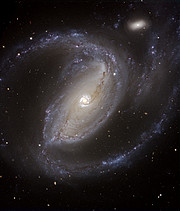