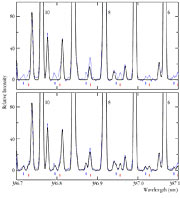 PR изображение eso0329c
Signatures of carbon-13 and nitrogen-15 in the spectrum of comet LINEAR (C/2000 WM1)
Присылайте нам ваши комментарии!
Subscribe to receive news from ESO in your language
Accelerated by CDN77
Условия