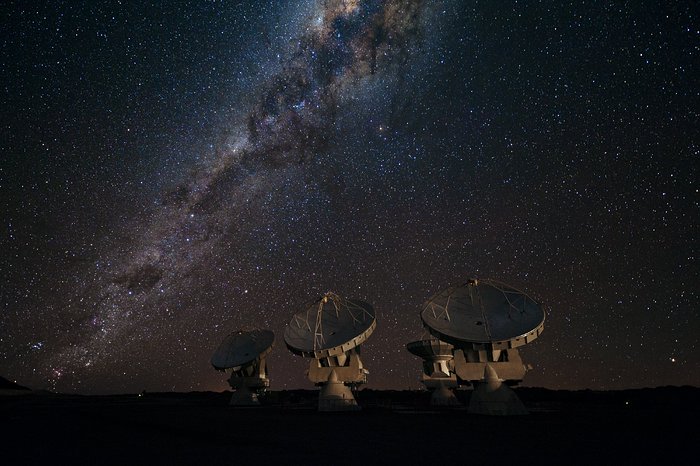 Four of the first ALMA antennas at the Array Operations Site (AOS), located at 5000 metres altitude on the Chajnantor plateau, in the II Region of Chile. Three of them — those which are pointing in the same direction — are being tested together as part of the ongoing Commissioning and Science Verification process. Across the image in the background is the impressive plane of the Milky Way, our own galaxy, seen in the sky edge-on. The centre of our galaxy is partially visible as a yellowish bulge crossed by dark lanes, at the upper edge of the image. The dark lanes are huge clouds of interstellar dust that lie in the disc of the galaxy. While opaque in visible light, they are transparent at longer wavelengths, such as the millimetre and submillimetre radiation detected by ALMA. ALMA, the Atacama Large Millimeter/submillimeter Array, is the largest astronomical project in existence and is a truly global partnership between the scientific communities of East Asia, Europe and North America with Chile. ESO is the European partner in ALMA.