Paranal in the Moonlight 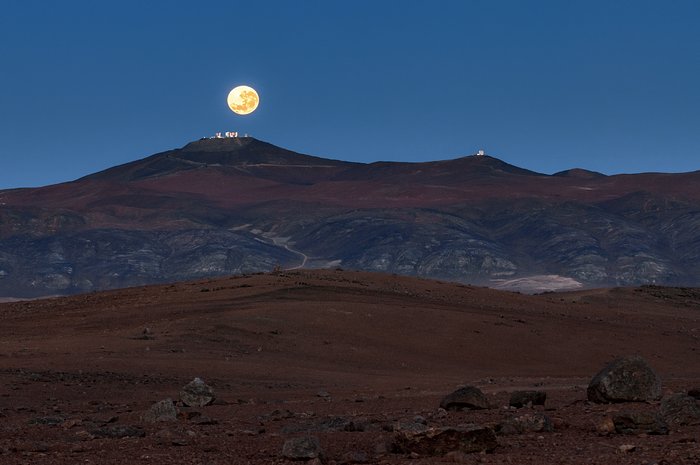 In a remote part of Chile’s Atacama Desert, at an altitude of over 2600 metres, sits Paranal Observatory. In terms of total light-collecting area, it is the largest observatory in the southern hemisphere, and is home to several of ESO’s cutting-edge telescopes. The main peak, visible here directly beneath the eerily tranquil yellow Moon, hosts ESO’s Very Large Telescope (VLT) and the 2.6-metre VLT Survey Telescope (VST). The VLT’s four Unit Telescopes can be seen on top of this peak, next to the smaller Auxiliary Telescopes on the far left and the VST towards the right.

As ESO continues to expand its array of telescopes in the southern hemisphere, more space is required for construction! A secondary peak around 1500 metres away from the VLT and VST — on the far right on this image — was chosen as the site for ESO’s Visible and Infrared Survey Telescope for Astronomy (VISTA). VISTA began observing in late 2009 and has returned some stunning images of the Universe at near-infrared wavelengths. By far the largest telescope in the world currently studying this kind of light, VISTA is able to obtain some truly unique images of the cosmos that would be invisible to most other telescopes.