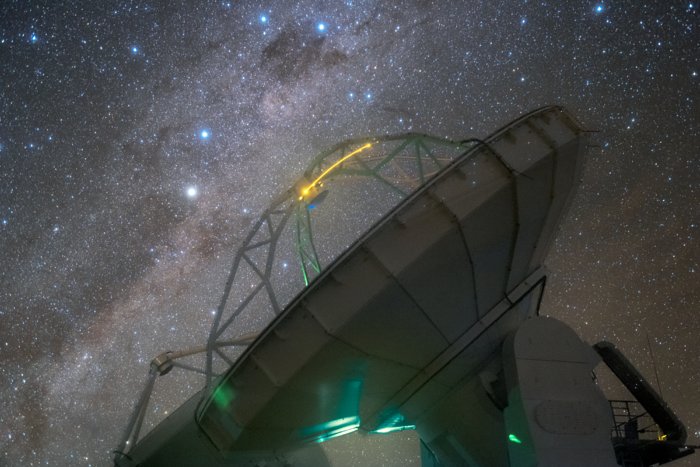 Humans have gazed up at the skies for a very long time, fascinated by the flowing shape of the Milky Way, the bright lights of the stars and planets, and the dark patches that obscure regions of sky. Different cultures had various names for these features; this Picture of the Week shows one object that has taken on several different identities over time, alongside an antenna of the  Atacama Large Millimeter/submillimeter Array (ALMA).

At the very top of the frame, within the band of the Milky Way, lies a pair of bright stars. These form part of Crux (The Southern Cross), one of the most recognisable constellations in the southern sky. Just below Crux, a dark, irregular shape is silhouetted against the central band of our galaxy. This is a prominent dark nebula lying just 600 light-years away: a giant cloud of molecules so dense it blocks out the light of anything behind it.

The name of this dark blob, however, depends on your culture. It is most popularly known as the Coalsack Nebula, but others identify it as a giant celestial bird. It is of great importance in Aboriginal Australian astronomy, where it is said to be the head of an emu stretching across the sky — a “constellation” made up not of stars, but of dust. Inca astronomers instead named the patch Yutu, referring to a shy, partridge-like bird species found in South America (the Tinamou).

Nebulae such as the Coalsack cannot be penetrated by visible light, but the stars and galaxies obscured by them often shine through in millimetre and submillimetre wavelengths. This region of the electromagnetic spectrum is explored by ALMA, an array with 66 antennas located in northern Chile.