A road to the stars 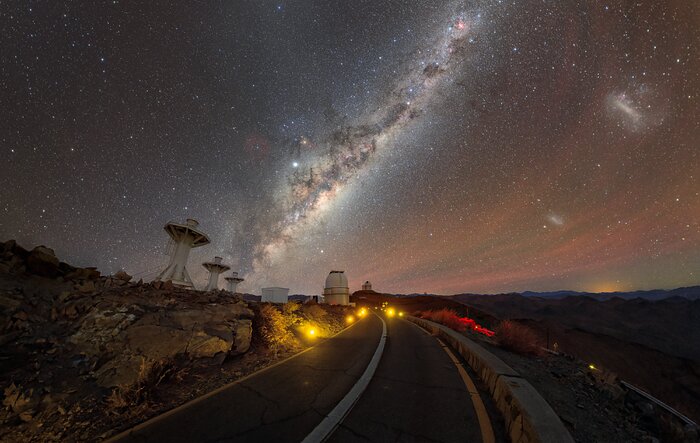 A stunning night view, taken close to the 1.54m Danish Telescope and the 3.6m telescope on the road at La Silla, shows the Milky Way above the horizon, accompanied by the Magellanic Clouds.

ESO’s 3.6m Telescope, seen here atop a hill at the centre of the image, is home to HARPS, an instrument dedicated to the discovery of planets outside the Solar System via the radial velocity method. This method enables the detection of a planet by measuring the wobbling motion of the central star caused by the gravitational pull of the planet itself.

The towers on the left are the support structures of the BlackGEM telescopes, which had not been installed yet when this image was taken. BlackGEM is an array of telescopes that will search for the light emitted by the optical counterparts of the most powerful gravitational-wave sources, namely colliding neutron stars and black holes.

On the right of the image, we see the Large and Small Magellanic Clouds, two irregular dwarf galaxies orbiting the Milky Way at a distance of approximately 160 000 and 200 000 light-years, respectively. In the Mapuche culture of south-central Chile, these neighbouring galaxies were known as lafken, labken or künchalabken (“the lagoons”) as well as rünanko (“the water wells”). [1]

The red filamentary emission stretching across the sky in the horizon is called airglow, which is light naturally emitted by atoms and molecules in the atmosphere through various physical and chemical processes. Despite showing up prominently in this image, airglow is invisible to the unaided eye.
[1] Source: Wenumapu. Astronomía y Cosmología Mapuche, Gabriel Pozo Menares & Margarita Canio Llanquinao
Telif: